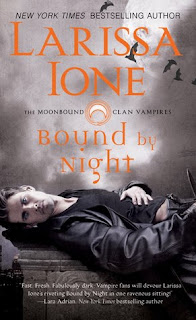 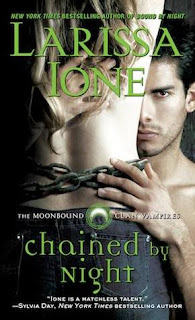 From Goodreads:
A WOMAN OUT FOR BLOOD

Nicole Martin was only eight years old when the vampire slaves rose up in rebellion and killed her family. Now she devotes her life to finding a vaccine against vampirism, hoping to wipe out her memories—along with every bloodsucker on the planet. But there’s one thing she cannot destroy: her searing, undeniable attraction for the one man she should hate and fear the most . . .

A VAMPIRE OUT FOR REVENGE

A member of the renegade vampire MoonBound Clan, Riker is haunted by demons of his own. When he recognizes Nicole and remembers how her family enslaved his loved ones, his heart burns for vengeance. But when he kidnaps Nicole and holds her in a secret lair, his mortal enemy becomes his soul obsession, his greatest temptation, and, perhaps, his only salvation—a hot-blooded lover who could heal him with her touch . . . or bury him forever.

From Goodreads:
New York Times and USA TODAY bestselling author Larissa Ione sets the night on fire with a thrilling new novel of irresistible hungers and immortal enemies in a world as sensual and dark as her Demonica series ...

THE FUTURE OF HIS TRIBE
Leader of the vampire clan MoonBound, Hunter will do what he must to save his people from extinction - or worse, a torturous eternity as vampire slaves and subjects of human experimentation. To keep his enemies at bay, he has agreed to mate a rival clan leader's daughter in return for peace between the clans and an ally in the looming war with the humans.

THE LOVER OF HIS SOUL

But survival comes at a price. First, Hunter must break an ancient curse by successfully negotiating three deadly tests. Then he must resist the searing passions of the gorgeous vampire warrior he despises but is bound to mate. Will Hunter stay true to his word? Or will he risk everything for the woman he really loves: the vampire seductress's identical twin sister?

My Review:
Oh, these books were really fantastic to read! I love her Demonica series, but now I'm loving this one just as much! I just wish that there were more books in this one, because yeah, these two were really awesome, and I want more!

I loved the world, the details that we were given, like the timing of the vampires and their history, were really awesome. Loved to hate the slavery and the unfairness! I just wonder what time this is actually set-because the whole vampire thing would change history, so it could be set now, or the future, or the past. I just don't know!

These were some really smoking romances! Nicole was raised by Riker's mate, and she thought that he killed her. And then they turned out to be mates! And Hunter is supposed to mate one girl, but falls in love with her twin sister! Yeah, these romances were just fantastic to read!

There was also some bits of mysteries in this book-who put Nicole's name on the order, and who the spy is. We found out the answer to the first, her half brother, but not the second one, and that's going to be the bigger one, I think! Can't wait to find out more there! And how things might have been set up for the next book, I wants to read it!

Just really fantastic to read these books, and I can't wait to read more!