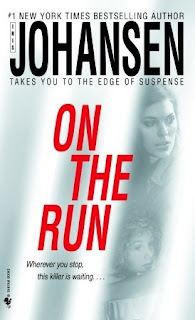 From Goodreads:
For eight years, single mother Grace Archer has been living a picture-perfect life raising her daughter on a horse farm in the small town of Tallanville, Alabama. Watching Frankie grow into a talented and confident young girl has made Grace as happy as any mother could hope to be. Happy enough, even, to forget the past. But the past never quite goes away. Which is why a certain charismatic man also moved to Tallanville eight years ago to watch over her.

But when violence threatens to shatter Grace and Frankie's idyllic home, the waiting is over. The ghosts of the past have returned. And they're hungry for blood. Now Grace must resume an identity she thought she had cast off forever, and match wits with an opponent as deadly as he is cunning. The prize: an extraordinary secret that only she can unfold. The forfeit: losing the thing more precious to her than life itself.

My Review:
Another fantastic Iris Johansen book! Yeah that I own a copy of it, though I have no idea where I bought it or when, just that I own it! Loved the romance, and the thriller, and how things came together, little bits and pieces, and yeah, that was just fantastic!

The cover's tag line, "Wherever you stop, this killer is waiting..." I found a bit odd. Because while the title is On the Run, and they do move locations, this is bigger than that-it's a bad guy with a lot of money who hired other people to do his dirty work. So the tag doesn't quite work for me!

Grace and Frankie, and Kilmer. They were just really great characters with personalities that just burst off the page! They were dealing with a highly stressful situation, and it kept getting worse, and they had their romance complicating matters, and yeah, loved reading about them!

I do wish that the ending could've had Frankie having completed Charlie's song. And that the guy in the CIA who was the mole was taken down, or at least mentioned. Other than that, it was a really fantastic ending, and I loved it! So awesome!

It was a really fantastic read, and I just loved everything about it!