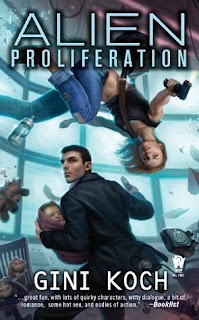 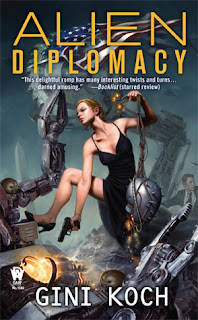 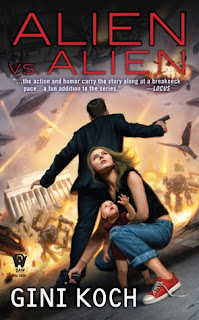 From Goodreads:
Alien Super-Being Exterminator Kitty Katt is expecting her first baby. But the alien attacks are getting more dangerous, and now Kitty and her Alpha Centaurion husband, Jeff, have to find out who's behind the conspiracy to kill Kitty's secret agent mom and what caused Kitty's transformation into a superhuman-and they've got to do it all before the baby shower...

From Goodreads:
Being newlyweds and new parents is challenging enough. But Jeff and Kitty Martini are also giving up their roles as super-being exterminators and Commanders in Centaurion Division while mastering the political landscape as the new heads of Centaurion's Diplomatic Corps. Enter a shadowy assassination plot and a new set of anti-alien conspirators, and nothing will ever be the same...

From Goodreads:
Jeff and Kitty Katt-Martini and the rest of the American Centaurion Diplomatic Corps are still recovering from their introduction to Washington D.C. politics, parties, and conspiracies. So when compromising pictures arrive, no one's too surprised. They're also the least of anyone’s worries.

Evil androids running amok, birds of all kinds and from all places creating havoc, a Senator trapped in an ever-tightening web of intrigue, and escalating international tensions all seem tough but manageable. But the disappearance of Jeff Martini and Charles Reynolds during the International One World Festival signals more than the usual nastiness — and it looks like even ACE can't help them.

Then new trouble arrives in old packages and even with the best hackers in the world, beings from near and far, the full might of Earth's military, and the Wonder Twins on their side, Centaurion Division's outmanned and outgunned.

Now Kitty's racing against the clock to find not only Jeff and Chuckie, but to keep the peace between Middle Eastern countries, all while searching for the bases of super-soldier operations — to stop them or die trying.

My Review:
Yeah, some more really fantastic books in this series! They were so freaking enjoyable, and so much happened in them! Like the birth of Jamie-Kat, Kitty and Jeff going from Commanders to being the new heads of Centaurion's Diplomatic Corps, and an alien invasion. And not the aliens we've come to know and love!

So Proliferation starts at the end of Kitty's pregnancy. Which is good and bad. Because we skip the times where there's nothing life-threatening. But we don't get to see the cuteness of Jeff while Kitty was pregnant! Well, we see the end, where his protectiveness is at it's current peak. It gets higher after the birth, believe me!

Diplomacy, there was the group from her Washington Wife's class, the spouses of the important Washington people. Yeah. Of course, there were multiple plots going on, but several were from the same group, and another was from a group of good guys whose actions didn't seem good, but they were! Well, as far as I can understand it! So much was going on!

Alien Vs. Alien was a pretty darned big book! Both in page count, and in the significance of the events that happen! And it was an absolute thrill to read! Yeah, between the kidnapping, keeping the peace, and then the invasion and the coming out as aliens, there was a lot going on!