Week 52 Review: On the Hunt 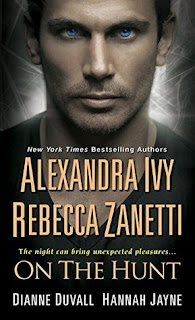 From Goodreads:
Four of today's most intriguing paranormal authors entice readers deep into the shadows, where vampires, immortals, and other supernatural creatures heat up the night...

On The Hunt by Alexandra Ivy
Mika Tanner has loved Bailey Morrell, a beautiful Healer, since childhood. But his duty as a Sentinel, a supernatural guardian of an ancient race, clashed with her rebellious spirit. Now a dangerous new anarchist group not only threatens life as they know it—but any chance of their being together again...

Scorpius Rising by Rebecca Zanetti
With a deadly disease spreading like wildfire across the country, microbiologist Nora Medina needs to focus all her energy on stopping the pandemic. Playing with dynamite—in the form of her way-too-hot ex—is the last thing she should be doing. ​But forced to work with Deacan McDougall against unexpected enemies with the seconds ticking by, she knows the explosion is coming...

Phantom Embrace by Dianne Duvall
Immortal Yuri Sokolov was born with the ability to see spirits, yet he's never seen one as lovely as Cat Seddon, the woman who haunts his home and his dreams. But amid their star-crossed love, a new danger may have Yuri facing a different kind of eternity.

Stake Out by Hannah Jayne
Vampire fashion designer Nina LaShay has a lot on her plate—just two days until fashion week and the model who was flirting with her photographer boyfriend is now a corpse in her studio. But when dead turns into undead and dangerous, Nina must find out who’s responsible…before the beautiful baby vamp takes too many bites out of the Big Apple.

My Review:
I just loved reading this anthology! I've really enjoyed the series that weren't starting in this book, and yeah, the Scorpius Syndrome had a fantastic start here! This was just a fantastic anthology of stories and I absolutely loved reading it!

On the Hunt was fantastic, giving us another look at the secondary characters or barely mentioned characters! And writing this review after starting Blood Lust, well, the events in this book are going to be important, because they set up for Blood Lust, dealing with the Brotherhood!

Scorpius Rising was really awesome to read! We knew that these doctors would fail, containment would fail, given the series title! But watching them fight to do so, and lose, and also dealing with their past relationship, yeah, it was so fantastic to read! Can't wait to read more of this serie!

Phantom Embrace was a bit bittersweet to read, given the events of Night Unbound! And I guess things all worked out in the end, though I don't know if they'll stay at David's house or not! Seeing as Marcus, and Seth, David and Zach are the only ones who can see them!

Stake Out was pretty hilarious! I'm a bit confused as to the timing with the previous short story and the rest of the series, and things were left a bit unexplained, but yeah, it was fantastic to read more about Nina, and it was a great end note to the series!

Absolutely loved reading this anthology, it was just so fantastic!