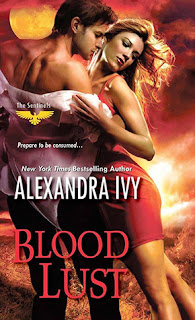 From Goodreads:
Blessed and cursed by their hidden abilities, the Sentinels have no choice but to live, and love, on the edge of humanity…

The Sentinel assassin, Bas, is facing the greatest challenge of his outcast existence. His young daughter, Molly, has been kidnapped. But her disappearance has brought the return of her mother, Myst, whom Bas has never forgotten--or forgiven.

Haunted by a vision that she's destined to create a weapon that will destroy thousands, Myst was never impulsive--until she met the irresistibly handsome Bas. But with the Brotherhood, the enemy of the high-bloods hunting for her, Myst had to stay on the run, to keep her child, and the world, safe. Now, with the most important thing in both their lives at stake, she and Bas must embark on a treacherous journey to save Molly, to confront the truth of Myst's fate--and to face their fierce desire for one another.

My Review:
Yeah, this book was so fantastic! I really hope that we get a 4th book, and more, because I really enjoy this world, it's really fantastic to read about! Also, having Myst and Bas as leads was really intriguing to read about!

We knew the whole time why Myst did what she did. But Bas didn't, and he understandably, didn't want Myst around their daughter. But as the truth came out, he came around to her side! It went quicker than I thought it would, but it was so great to read!

After Blood Assassin, it was great to be in the mind of Bas, and get his story, and Myst, who we did meet in Born in Blood! They were so fantastic together, a lot of sparks were flying, and of course, they did have Molly so that added so much more, because she was so loveable!

I kinda figured out what was going to happen, after all, Myst gaining the ability to communicate via mind with Molly after giving birth, combined with the discovery that Molly ignited dormant abilities in people, made me think that she was the weapon that Myst would create. So yeah, glad how that all worked out!

This was a really wonderful book, and I hope we get more in this series, 3 books and 2 short stories just simply isn't enough time in this world!