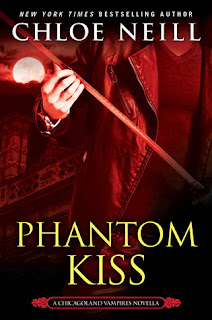 From Goodreads:
In this all-new novella from the New York Times bestselling author of Midnight Marked, Merit, Ethan, and the rest of Cadogan House crew discover that not all undead creatures are kindred spirits…

Vampires generally aren't afraid of things that go bump in the night, but Merit and Ethan are extra jumpy after a recent attack by a dark sorcerer. So when they learn that someone is messing with graves in Chicago's cemeteries, stealing skulls and snatching souls, they fear that their powerful foe might be back for even more magical vengeance.

But after a specter begins haunting Cadogan House—and targeting vampires—they realize that their being taunted by an altogether different sort of monster. A ghoulish villain straight out of the Windy City's urban legends is on the prowl—and he won't stop until he's killed again...

My Review:
This short story was really great! I only started on this series recently, but this is the second last story in this world. Which is a bit sad, but there is still a lot of life left! So I guess it's good that it's ending while that's still true? I'm going to miss these guys after Blade Bound!

So this story begins with a combined wedding shower party thing. Which was funny, and a bit scary, what with one of her racist and ignorant relatives. And then there was the whole disturbed grave and stolen skull!

Of course things aren't as easy as they appear and Cadogan House gets haunted-and that brings in a whole 'nother set of issues, because the Order dislike things making sense, apparently! But they deal with things pretty great!

Most of this book was of things not what they seem, things hidden and things were lied about, but this group of people have become pretty fantastic investigators! And yeah, the wedding is in 2 months! Otherwise known as the beginning of Blade Bound, since there was a chapter of that in this, which was really great!

Loved reading this book, it was a great step towards saying goodbye to this world, however much we don't want to!