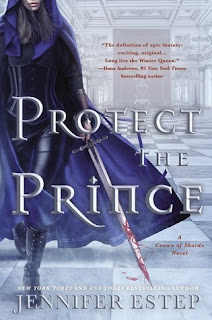 First, Evie has to deal with a court full of arrogant, demanding nobles, all of whom want to get their greedy hands on her crown. As if that wasn’t bad enough, an assassin tries to kill Evie in her own throne room.

But dark forces are at work inside the Andvarian palace, and Evie soon realizes that no one is safe. Worse, Evie’s immunity to magic starts acting in strange, unexpected ways, which makes her wonder whether she is truly strong enough to be a Winter Queen.

But Evie’s magic, life, and crown aren’t the only things in danger—so is her heart, thanks to Lucas Sullivan, the Andvarian king’s bastard son and Evie’s . . . well, Evie isn’t quite sure what Sullivan is to her. 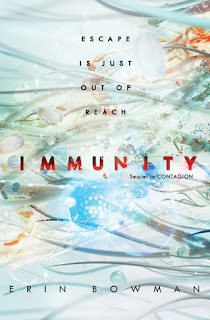 They thought their nightmare was over, but Thea, Coen, and Nova’s rescue was only the beginning. After being imprisoned on a ship they thought was their ticket to safety, it’s clear that the threat they left behind isn’t as distant as they’d hoped—and this time the entire galaxy is at risk.

Now that threat is about to be unleashed as an act of political warfare. To prevent an interstellar catastrophe, the survivors must harness the evil they faced on the planet Achlys and learn to wield the only weapon they have left: themselves.

The first installment in Erin Bowman’s duology earned a starred review from Publishers Weekly, who called the plot “intricate and action-packed,” and fans of Jonathan Maberry, Rick Yancey, and Madeline Roux will relish in Bowman’s tense, high-stakes conclusion to the events of Contagion.

Yeah. I've read Protect the Prince and it was a amazing book! Loved it, and yeah, can't wait for it, and Immunity to come out! What about you guys? Happy reading!
Posted by Louisa @ Words I Write Crazy at 6:00 AM