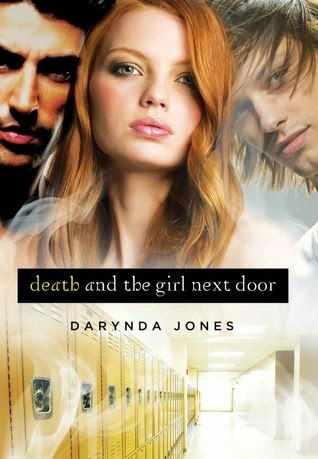 High school is not quite as painful as she thinks it will be, and things are as normal as they can be.  Until the day the school's designated loner, Cameron Lusk, begins to stalk her, turning up where she least expects it,  standing outside her house in the dark, night after night.  Things get even more complicated when a new guy—terrifying, tough, sexy Jared Kovach—comes to school.  Cameron and Jared instantly despise each other and Lorelei seems to be the reason for their animosity.  What does Jared know about her parents?  Why does Cameron tell Jared he can't have Lorelei?  And what will any of them do when Death comes knocking for real?  Thrilling, sassy, sexy, and inventive, Darynda Jones's first foray into the world of teens will leave readers eager for the next installment.

From Goodreads:
The normal part of Lorelei MacAlister's life didn't just slip away quietly the day Jared Kovach came to town. Nope. The normal part of her life shattered. It exploded. It burst into a gazillion shards of fleeting light.

It went out with a bang.

While her best friend, Brooklyn, is focusing all of her energy on helping Lorelei hone her abilities, Lorelei is dealing with the reality that Satan's second in command has taken up residence inside her body. Oh, and the fact that she has a crush on the Angel of Death. But what a beautiful death it is. If those weren't bad enough, something sinister has come to town and it wants nothing more than to hear Lorelei's dying breath as it strangles it out of her. Thank goodness the gang has a supernatural champion. But what happens when the only being who can save them switches sides midstream? How can a group of misfits capture one of the most powerful beings ever created? And will they find out how to bring Jared back to them before it's too late?

From Goodreads:
The fate of the world is not something a girl wants on her shoulders, and that is especially true for Lorelei McAlister, even though that is exactly where the world's fate has decided to take up residence. Lorelei has seen first hand the horrors that lie beneath our everyday world. And those horrors are getting her friends killed. Because of this, she agrees to leave the sanctity of her hometown and is sent to a different world entirely. A boarding school. But even here she is being watched. Someone knows what she is. What she carries inside her soul. And now, alone and vulnerable, she must face the fact that there are people who want her dead, and no matter where she goes, no matter how far she runs, the lives of her friends and family are in mortal peril.

The characters in this series are just really fantastic! Lorelei, she's smart and loyal, and so much fun to read about. Brooke is smart and fierce and unrelenting. Glitch is hilarious and with a well deserved fear of turtles. Jared and Cameron are both badass, and in regards to Lorelei, protective. Such a great team! I loved Jared and Cameron together, the friction there, even after the big battle, is a lot of fun to read!

It's a lot to take in, the fact that you're supposed to stop a war from even happening, that you have a demon living inside you, and that while not at fault, your actions led to your parents disappearing. And Lorelei gets hit with that pretty much all at once. Not fun!

We spend almost half of the final book with the wrapping up of loose ends. Even knowing how it was going to end, it was so satisfying to read that conclusion again! There was so much stress and anxiety over how she was going to end the war before it was started, and this gave her time to relax after doing so!

Loved reading these books so much, and I still have hope that we'll get some short stories in this world of how Jared fell in love and such!

Death and the Girl Next Door:

Death, and the Girl He Loves: