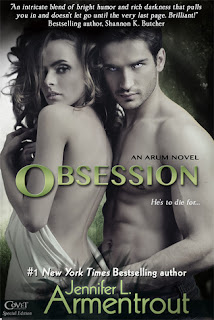 From Goodreads:
He’s arrogant, domineering, and... To. Die. For.

Hunter is a ruthless killer. And the Department of Defense has him firmly in their grasp, which usually doesn’t chafe too badly because he gets to kill bad guys. Most of the time he enjoys his job. That is, until he’s saddled with something he’s never had to do before: protect a human from his mortal enemy.

Serena Cross didn’t believe her best friend when she claimed to have seen the son of a powerful senator turn into something... unnatural. Who would? But then she witnesses her friend’s murder at the hands of what can only be an alien, thrusting her into a world that will kill to protect their secret.

Hunter stirs Serena’s temper and her lust despite their differences. Soon he’s doing the unthinkable—breaking the rules he’s lived by, going against the government to keep Serena safe. But are the aliens and the government the biggest threats to Serena’s life… or is it Hunter?

My Review:
This was a fantastic book to read! It was such a pleasure, and yeah, it was great to be in this universe again, and yeah, to be sometimes in the head of an Arum, and a lady who is thrown into this world, and has something of an attraction to said Arum!

I utterly loved their interactions! Their banter was so funny, and yeah, he didn't make a lot of sense if you take a human perspective, but if you take his, it does. Though I don't get why she should thank him for kidnapping her. True, his orders are to protect her, but he kidnapped her!

You know that one conversation, when they're making chicken and pasta, and about the war between the Arum and Luxen? It was pretty dark, and it paints a picture that is pretty contrary to Shadows, Obsidian, Onyx, and Opal. But they are enemies, so, yeah.

Some members of the Lux are the bad guys, and that's a change, and it was really interesting to read, on how to counter the abilities, and fight them, and to root for Serena and Hunter to win, against them, is a kinda weird feeling, especially with the whole end of Obsidian!

I loved this book so much, and I loved the one scene with Daemon, which means I really can't wait for Origin!!!