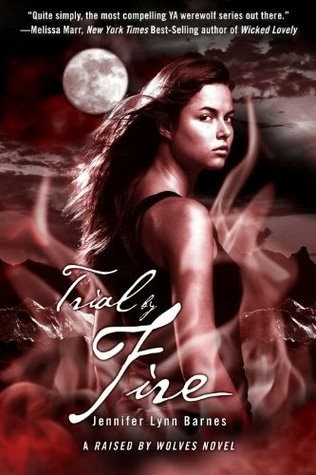 Bryn is finally settling into her position as alpha of the Cedar Ridge Pack—or at least, her own version of what it means to be alpha when you’re a human leading a band of werewolves. Then she finds a teenage boy bleeding on her front porch. Before collapsing, he tells her his name is Lucas, he’s a Were, and Bryn’s protection is his only hope.

But Lucas isn’t part of Bryn’s pack, and she has no right to claim another alpha’s Were.  With threats—old and new—looming, and danger closing in from all sides, Bryn will have to accept what her guardian Callum knew all along. To be alpha, she will have to give in to her own animal instincts and become less human. And, she’s going to have to do it alone.

My first review of Trial by Fire
My Review:
Oh, this book broke my heart a little, not as bad as Taken by Storm did and will, but I mean, she has to kill the guy that Maddy likes, Lucas, and she does it using her Resilience, and the fact that she was an alpha, and had the pack's strength, and she sent him to slept and die. So that breaks, and that leads to Taken by Storm.

Loved how we got more of this world, of people with gifts besides resilience, and has to fight that, and yeah, that was really interesting, how that was connected to Ali, and how Caroline was connected to Ali-they were sisters, and their mother, was the main threat that they faced, the one that they could put a face and a name to for the other packs, but the guiding hand was Shay, mister evil!!!

Loved Caroline's talent, to be a perfect hunter, to not be able to be tracked by scent, and to have perfect aim, and how she was feared by the rest of the group, because her mom told her too. Yeah, her mom was evil. But there was Jed, and he helped, because he was like Byrn, human, and Resilient, and recognizant of the fact.

Then there was just the great cast of characters, in the inner gang of Byrn's, her friends, Devon and Lake, and Chase, and yeah, how they were all connected by the pack, in each others minds, so they could talk, and yeah, that was just really great!

I loved this book, and loved rereading it, and I can't wait to reread Taken by Storm!!!