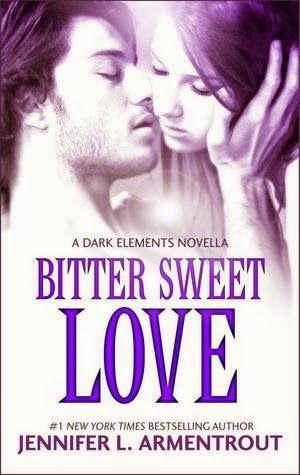 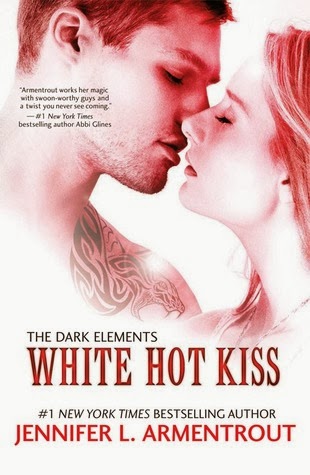 From Goodreads:
In a sizzling prequel novella to her new series THE DARK ELEMENTS, #1 New York Times bestselling author Jennifer L. Armentrout draws readers into the extraordinary, irresistible world of Wardens and demons.

Dez wasn't just Jasmine's crush. A gargoyle Warden like Jas, he helped her come to terms with her destiny—fending off demons and maintaining balance between good and evil. He was her everything...right until the moment he disappeared without a trace. It didn't help that Jas's father had just announced that she and Dez would one day be mated. Hard not to take that personally.


And now he's back, three years older, ten times hotter, ready to pick up exactly where they left off. But Jas isn't taking that risk again. Dez has seven days to meet all her conditions and earn back her trust. Seven days filled with terrifying danger and sweet temptation. Seven days to win her heart—or shatter it all over again...

From Goodreads:
One kiss could be the last.

Seventeen-year-old Layla just wants to be normal. But with a kiss that kills anything with a soul, she's anything but normal. Half demon, half gargoyle, Layla has abilities no one else possesses.

Raised among the Wardens—a race of gargoyles tasked with hunting demons and keeping humanity safe—Layla tries to fit in, but that means hiding her own dark side from those she loves the most. Especially Zayne, the swoon-worthy, incredibly gorgeous and completely off-limits Warden she's crushed on since forever.

Then she meets Roth—a tattooed, sinfully hot demon who claims to know all her secrets. Layla knows she should stay away, but she's not sure she wants to—especially when that whole no-kissing thing isn't an issue, considering Roth has no soul.

But when Layla discovers she's the reason for the violent demon uprising, trusting Roth could not only ruin her chances with Zayne…it could brand her a traitor to her family. Worse yet, it could become a one-way ticket to the end of the world.

My Review:
Oh, man, this was such a fantastic start to a series! The first novella, a look at the world as it is for full gargoyles, and a brief meeting with Layla, as a child, and then a full novel of Layla, who is half gargoyle, half demon, which makes her extra special in this world where they gargoyles fight demons!

I loved these characters, their wants made them relate-able (spell check doesn't like it all together in 1 word), their flaws, more so, because hey, these are supernatural creatures, who aren't exactly bound by the same rules as the rest of us.

I feel for Layla. I really do. Because if her lips touch another person's lips, and they have a soul, then that soul get's sucked out with her kiss. So she hasn't kissed anyone. But then there's Roth, and like it says in the synopsis, he has no soul, so he could, if they both wanted, kiss her, and things would be splendid. Well, in the fact that it won't cause a soul to be lost.

But it could be considered siding with the enemies for the gargoyles, and they've been the ones to raise her, if not exactly very nice, because she's half what they hunt. And they used her, by having her go out during the day, while they're asleep, and tag demons, so they could have an easy time hunting those marked demons during the night. And still, some of the gargoyles treated her pretty horrible, and I wished she could've retaliated, but they would've used that as ammunition against her, and it would've ended badly, so that sucked for her!

One thing that I really loved, is the fact that Bambi is on the cover with Roth's arm! So awesome, and I loved that detail, it just grave a bit more evidence that covers represent what's inside the covers! Which I just love!

Yeah, just loved these books, and I can't wait for Stone Cold Touch!!!