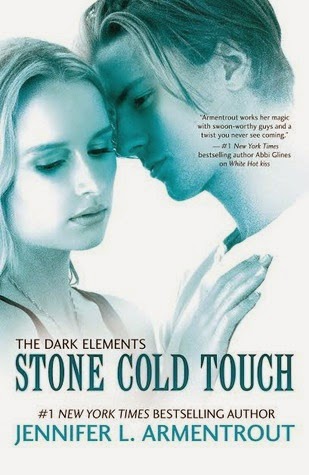 From Goodreads:
Every touch has its price

Layla Shaw is trying to pick up the pieces of her shattered life—no easy task for a seventeen-year-old who's pretty sure things can't get worse. Her impossibly gorgeous best friend, Zayne, is forever off-limits thanks to the mysterious powers of her soul-stealing kiss. The Warden clan that has always protected her is suddenly keeping dangerous secrets. And she can barely think about Roth, the wickedly hot demon prince who understood her in ways no one else could.

But sometimes rock bottom is only the beginning. Because suddenly Layla's powers begin to evolve, and she's offered a tantalizing taste of what has always been forbidden. Then, when she least expects it, Roth returns, bringing news that could change her world forever. She's finally getting what she always wanted, but with hell literally breaking loose and the body count adding up, the price may be higher than Layla is willing to pay…

My Review:
I loved this book so much! It was Zayne's book like White Hot Kiss was Roth, with Zayne on the cover, and being the guy that Layla spends the most time with, and who got to have a scene from the book in his POV, and yeah, it was great to know him!

This book takes off 2 weeks after Kiss ended, and Roth is still gone, and Layla is missing him-and then he just appears, and does the below paragraph. And Abbot shows his mistrust of Layla more heavily, because of her developing powers. And it really sucks for her!

So Roth pulls the time honoured play of pushing Layla away to protect her. And as almost always, it doesn't work. Does it ever? I can' think of any instance where that move actually works to the benefit of the recipient who's supposed to be saved from the bad thing the deliverer has hanging over his head!

And the thing is, in the ending, about who was the Lilan, that both Roth and Zayne, and Layla herself, thinks that she's the Lilan, that's how poorly they think of her. And when it turns out to be Sam? That's suck a cliffhanger, I'm almost tearing up!

Favourite lines: "Oh, for the love of God, if he pulled out a knife, I was going to give up on life in general." Yeah, already 1 person who's pulled a knife on her! "'You thinik you're cute?' 'Nah, I think I'm sexy.'" That definitely sounds like Roth! "Are you...serious growling at me, Stony?" Yep! You both love Layla, after all! "My books miss u. How weird is that. If I get my cell taken from me, it's ur fault. Holy s**t, Layla, where r u?!? You have no idea who just walked into bio!!! Roth is here! Holy canola oil, why aren't u here to witness this? Ok, he says he had mono. Srlsy? DO people still get mono? And who the duck was he kissing? Duck? I ddint' mean duck. That's SO not what I meant, autocorrect. He asked where u were. I told him u joined a cult. I laughed. He didn't." Love these texts Stacey is sending her! So funny! "I busied myself picking out a pen from my horde, settling on a purple one that looked as though it had taken a bath in glitter...or with Ke$ha." That's a lot of glitter! "She tackled the other teacher. Like jumped on his back and brought him down to his knees. Right there. In the middle of the hall, full of gaping students and faculty. Brought him down, cocked back and arm and punched the dude right between the legs." That is very random! Though almost expected, in their school! "Twisting at the wasit, I threw the hamburger on the floor behind Roth as hard as I could. The satisfactory splat it made as ketchup and mayo splattered like a gruesome burger massacre brought a wide smile to my face." The poor burger! It was innocent, Layla, not it's fault that Roth picked it! "Don't hurt the fries. That would be sacrilegious." Yeah, you already killed the burger! "Did you know the reason they went with a Chevy Impala on Supernatural was because a body would fit in the trunk?" Well, sounds about right! Love how her love of Supernatural made it to the page for the first time I've read! And as a side note, my parent's Jetta, it can fit 3 bodies in the trunk-me, my brother, and an exchange student demonstrated this! "If they try to mug us, I'm seriously going to laugh." Yeah, this group would not be a good one to mug! "You ate my cookie dough! That's so wrong." Yeah, you'll have to make it up to her, Zayne! "You didn't do crap today but hang out in your room and stare at Izzy as she tried to bite your feet." Why is the toddler trying to eat feet? That's so weird! And cute! "And it also wasn't the firs time I'd found myself jealous of said demonic familiar, and how messed up was that?" Well, considering why you're jealous, not so much! This was the scene from Zayne's POV, so I put it here, where it happened in the chronological order of the book! "'Guess what I found?' 'Obviously not a better personality.'" Yeah. not so much! "It wasn't as if they were expected to join hands and sing 'Kumbaya' together." Nope! And they have every reason to be hostile! "...because unless we were planning on bum-rushing the house, a little demonic persuasion was needed." Aw, why can't they bum rush it? "'Do I look like I care?' 'Do I look like I won't rip your head off your shoulders?'" Nope, and nope! So something should be going bad in three...two...one.... "There is nothing cool about my blood creating a pod that looks like something straight out of Alien." No, but something epic is there! "A muscle ticked along Zayne's jaw and then he spun on Roth, cocked back his arm and punched him right tin the face." Well, that took a while to get here! "Stomach, meet butterflies." Yes, this is something you've thought about for forever. And it's happening. Squee!!  "So on top of being an infernal ruler and Roth's wingman, Cayman was apparently also a bartender. Odd." A demon of many talents, is Cayman, apparently! "A succubus and an incubus. I call them Sucky and Inky. I think I'm going to change their names to Dead and Deader." Yeah, they followed the rules, but they were messing with Layla! "You'd trip and break your neck or fall over one of our guards. Or try to pet it." Like your cats that are tattoos? "Can I yell 'By the Power of Christ, I compel you' whenever we get to that point?" In the exorcism? Too bad that you can't because that's not part of what thing you're doing! "I didn't think we'd ever stop kissing. There was no way.Not even if tan Alpha landed beside us and started to dance naked." Which is an image! "My high school was turning into the Hellmouth." Yeah, it is, great Buffy reference, too! "Roth. One of his arms was draped over my hips and the other was under my shoulders. His hand was buried deep in the mess of my hair. His chest rose and fell steadily. I could feel Bambi on the other side of me, stretched out. What an odd...sandwich to be a part of." No kidding, a Demon, a snake demon familiar sandwiching a half Warden, half Demon? That is very odd, but very right! "Roth had felt that his Porsche was too noticeable, so he'd borrowed Cayman's car. Which was a vintage Mustang. Yeah, real inconspicuous there." Love how thick the sarcasm is there!

Wow, I really enjoyed this book, and if I had read it sooner, then I would've voted for Roth, but it was closed before I could vote. But thinking about it, I'm glad that I didn't have the chance, because then it is what it is, and yeah, the wait for Every Last Breath is going to be evil, because it comes out in July according to this!