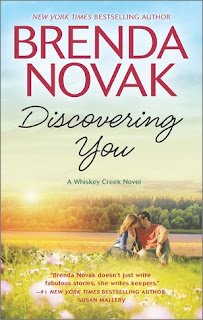 From Goodreads:
Can she ever trust another "bad boy"?

India Sommers once had the perfect family—until an ex-boyfriend broke in and shot her husband. Not only did that cost her the man she loved, a respected heart surgeon and the father of her child, but she also feels responsible. Charlie died because of the people she hung out with before she had the strength to change her life.

Just after moving to Whiskey Creek with her little girl, Cassia, to start over, she's learned that her ex-boyfriend's trial ended in a hung jury. He's getting out of jail; he could try to find her again. And that's not all that scares her. She's extremely attracted to her next-door neighbor, but Rod Amos is the handsome "bad boy" type that's given her so much trouble in the past. If she got involved with him, her in-laws would sue for custody of Cassia.

India has to keep her distance from Rod—but the more she gets to know him, the more difficult that becomes.

My Review:
Yeah, another fantastic book! And while I'm not sure if there's going to be another book since it's been so long since this book came out, and there's been a few other books that she's written since, but I still want more of this series! There's still so much that could happen in this series!

This is another book in the series where it doesn't really focus on the main group of friends, and there's been a few of those in the series, mainly Come Home to Me, that focus on other characters, the Amos brothers. A reason why I want more books in this series!

Cassia has had a hard time. She had an ex-boyfriend who came into her home, killed her husband and threatened her daughter. Plus her in-laws were, well, pretty awful. Plus, the trial didn't convict the guy, so he's still a problem. So yeah, loved Cassia and Rod together!

There was also some scenes developing another couple, which is yet another reason why I want an 11th book. Since they were step-siblings, well, they aren't related, but there's still some social stigma attached there. But things weren't resolved, and I want more!

This book was just so great, and I enjoyed reading it so much! More would be so excellent!