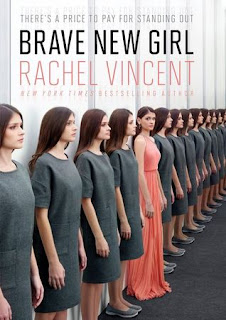 From Goodreads:
In a world where everyone is the same, one girl is the unthinkable: unique. A high-stakes fast-paced series launch from New York Times bestselling author Rachel Vincent.

We have brown hair. Brown eyes. Fair skin.
We are healthy and strong and smart.
But only one of us has ever had a secret.

Dahlia 16 sees her face in every crowd. She's nothing special—just one of five thousand girls created from a single genome to work for the greater good of the city.

Meeting Trigger 17 changes everything. He thinks she’s interesting. Beautiful. Unique. Which means he must be flawed. When Dahlia can't stop thinking about him—when she can't resist looking for him, even though that means breaking the rules—she realizes she's flawed, too. But if she's flawed, then so are all her identicals. And any genome found to be flawed will be recalled.

Getting caught with Trigger would seal not only Dahlia's fate, but that of all five thousand girls who share her face. But what if Trigger is right? What if Dahlia is different?

Suddenly the girl who always follows the rules is breaking them, one by one by one. . .

My Review:
I just loved reading this book! I've really enjoyed all of Rachel Vincent's books, and I was glad for another new series, since the last YA series ended (though I would love it if we could get more in that series!) and I really enjoyed being in this world!

Reading about Dahlia and Trigger, I really enjoyed their relationship. Sure, it was uneven, given that she was a labourer and he was a soldier, and they were raised differently. It was the start of showing the unfairness of this world, that they were raised and treated in totally separate ways.

The ending was one heck of a cliffhanger. THey escaped, but in the process, which was about half of this book, they learned about their world, and how everything they thought was one way, was really another. And it ended in a huge ending, meeting her clone who didn't grow up with the rest them!

We did get a quick look at what the next book will be like, and it's so weird, because it's the same world, but different people, so it's totally different. It just shows the differences between Dahlia and the girl who was raised in her place. Just, oh, so different, and so awful, that people were treated that way!

This book was just so wonderful, and I can't wait for Strange New World!