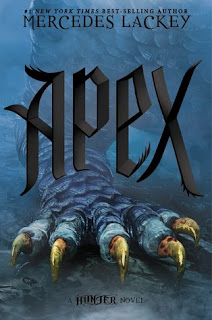 From Goodreads:
Being a member of the Elite Hunter Command imperils Joy in more ways than one. In their latest clash with Othersiders, the army of monsters nearly wiped them out. Apex City is safe . . . for now. But within the city barriers, Joy must wage a different kind of war.

The corrupt and powerful PsiCorps is determined to usurp the Hunters as chief defenders of Apex City and Joy is now squarely in their crosshairs. Unused to playing political games, she has very few people she can truly trust—not even Josh, her first friend in Apex City, who broke up with her when it became too dangerous for a Psimon to be dating a Hunter.

Then Josh comes to Joy for help. He fears that Abigail Drift, the head of PsiCorps, will soon use him in her twisted experiments designed to empower PsiCorps and render Hunters superfluous—a scheme that's already killed off dozens of Psimons. Joy manages to smuggle Josh to safety, but he cannot evade Drift forever . . .

As Joy faces ever more powerful Othersiders, she is helped by the most surprising ally imaginable—the same Folk Mage she once met in battle on the train to Apex City. But can Joy trust the most cunning and treacherous of all Othersiders?

In the thrilling finale to Mercedes Lackey's #1 New York Times' bestselling trilogy, Joy must risk everything to end a brutal war . . . before she loses all she's ever loved.

My Review:
Oh, wow, this book was so fantastic! I've loved this series since the beginning, and it's a bit sad to see it end. But I don't want it to end, I want to spend so more time in this world. Like, spin off series, please! Because that would be just so fantastic!

This book picks up pretty quickly after Elite. Joy has another hunt, and it brings up the idea that she had from her home and what her instructors did, which is to have someone be in charge of the training of apprentices, but on a smaller scale, just pairing up a Hunter and an Elite. Which works, and it was a great idea!

That ending was just epic! They were outnumbered and outgunned, and betrayed, but through great allies, they won. Well, one bad guy down, and two on the run. Which is another reason why I want more books in this world! And of course, there are still monsters to hunt, but yeah, life is more normal now!

Absolutely loved reading this book, it was so fantastic, and I hope we get more!

Author: Mercedes Lackey
Series: Hunter #3
Read: September 7th, 2017
Source: Ebook.bike
Reason Why: Love her books, and this series, so much, and it's a End of Series 2017 Book, Prequel & Sequel Challenge 2017 Book and a WoW Book!
Publisher: Disney-Hyperion
Published: September 5th 2017