Yeah, we have the cover of Dark Queen by Faith Hunter! Another one of these where I meant it post it the day, well now 2 days, ago! 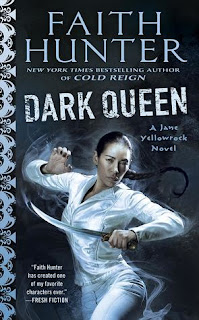 From Goodreads:
Jane Yellowrock is in the fight of her life in the latest novel in the New York Times bestselling series that captures "the essence of urban fantasy" (SF Site).

Jane Yellowrock is a shapeshifting skinwalker, and as the chief enforcer for the Master of the city of New Orleans, she's the woman that rogue vampires fear most. But now a blood challenge has been issued to Leo by the ancient emperor of vampires, and Jane must stand and fight.


I have to admit, but I don't like this cover as much. One, it's the opposite colour scheme of Cold Reign, dark background, light outfit. Two, it looks like she's wearing a sweater and jeans. While that's different then Jane in her armour, I dunno, I just don't like it. I know I'll love the book, though! What about you guys? Happy reading!
Posted by Louisa @ Words I Write Crazy at 3:38 AM