Week 37 Review: The Problem With Forever 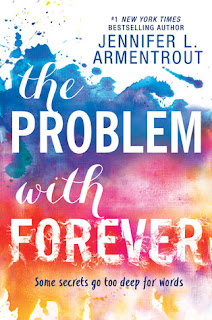 From Goodreads:
For some people, silence is a weapon. For Mallory "Mouse" Dodge, it’s a shield. Growing up, she learned that the best way to survive was to say nothing. And even though it's been four years since her nightmare ended, she's beginning to worry that the fear that holds her back will last a lifetime.

Now, after years of homeschooling with loving adoptive parents, Mallory must face a new milestone—spending her senior year at public high school. But of all the terrifying and exhilarating scenarios she's imagined, there's one she never dreamed of—that she'd run into Rider Stark, the friend and protector she hasn't seen since childhood, on her very first day.

It doesn't take long for Mallory to realize that the connection she shared with Rider never really faded. Yet the deeper their bond grows, the more it becomes apparent that she's not the only one grappling with the lingering scars from the past. And as she watches Rider's life spiral out of control, Mallory faces a choice between staying silent and speaking out—for the people she loves, the life she wants, and the truths that need to be heard.

My Review:
I loved reading this book! Mallory was so fantastic, and I loved reading about her and Rider! Mallory has had a hard life, and while things have gotten easier, she still has to deal with the lasting effects of what she experienced in her past.

We didn't initially get Rider's name, it was just "him." This didn't last long, but the sense was good while it lasted. Rider and Mallary together, that was like, the perfect pairing. Her adoptive parents weren't thrilled about it, but they mostly accepted it, more her mom than her dad.

Mallory had her issues to work through. As she put it, was was conditioned to be quiet, if she made noise, that drew attention to her, and she would be hurt. I really enjoyed watching her grow, and work through her issues. Sure, things aren't solved by the end, but they aren't as bad as when the book began. So that was great!

The one thing that I didn't like, was the death of Jayden, it was just, I didn't think we really knew him, so it didn't hit as hard as it did, Mallory and Rider. I wish we could've had more time with him, really gotten to know him, so it would hit harder, you know? I'm a sucker for pain!

Absolutely loved reading this book, it was so great, and it was a great stand alone book!