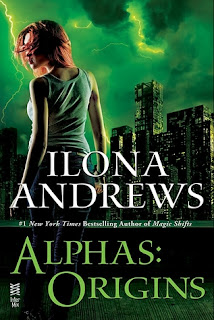 From Goodreads:
From Ilona Andrews—#1 New York Times bestselling author of Magic Shifts and the Kate Daniels novels—comes a stark, seductive tale of a world torn asunder by supernatural gifts and irresistible passions...

Karina Tucker is driving a van of children home from a field trip when an unplanned detour to a seemingly ordinary rest stop changes her life. There, she witnesses a world beyond humanity's sight, of frightful powers and chaos, where she is in death's grip... before an irresistibly dangerous male saves her—only to take her captive.

For she is a rare commodity in the shadowy realm she's entered.

Karina soon finds herself caught in a violent civil war where those with inhuman powers strive to destroy each other without mercy. And it becomes all too clear that she must make a choice: submit and become a pawn, or take hold of her own destiny and fight for survival against impossible odds.

My Review:
I really enjoyed reading this book! It's totally not like other Ilona Andrews books-it's dark, and there's not the same amount of humour to offset it-and that's why they've said that because it's not of their brand, that it's unlikely that they'd write in this world again...I really want a sequel!

I will say that this book is rough, in more ways than one. It's a bit unpolished, which I'm placing at the feet at the fact that they found out after it was written that it was meant for a Berkley romance anthology, and had to lighten it up. I can understand that, I still want to know what it was like in it's original form!

This world was so fascinating! Of aliens coming to populate worlds, and having different subspecies, and whichever one became the most hardy and easily bred, became the one of that planet, and the others died off. And then how that process got thrown off when one subspecies decided that they would be the one to survive instead of humans...yeah, so awesome!

This does have a tiny bit of romance. Mostly, it's the guy obsessing over her body and his interest in it, and her worrying about stockholm syndrome...but she comes into her powers, and things are more equal, and that was fantastic!

This was such an amazing novella, and such a great world, and I desperately need more! Maybe a pseudonym, and having another author brand? Because again, I'm desperate for more!