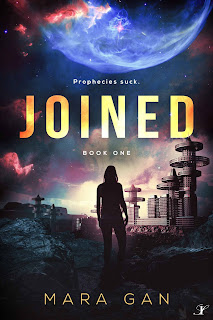 From Goodreads:
Duty and prophecy get in the way of everything.

All I ever wanted to do was read my books, play my sports, and help people. Life and prophecy had other things in mind.

Helping people is what I do; as an empath and semi-frequent telepath, I can easily sense and understand people's needs and emotions. Sometimes even before they do. Being able to read everyone's thoughts and feelings all the time can drive me crazy with anxiety, but that moment when I can finally make someone's life better makes everything worth it.

Unfortunately, I’m also the next in line to rule the galaxy, I'm the only diplomat most planets will listen to, assassins try to kill me on an annoyingly regular basis, and a much-vaunted Prophecy has decreed that I'm going to die. Oh, and someone blew up my home planet.

Kind of a lot to deal with, right?

Too bad I just got another problem: a big, irritating, overbearing bodyguard with serious anger management issues.

And I think I'm falling for him.

My Review:
This book was really great and enjoyable to read! I mean, when I'm choosing if I'll read a book-especially for a book tour review like this one-I have to be interested in reading it, usually hooked by the synopsis. And the synopsis of this book had notes of funny, romance, and maybe a mystery. And all elements were present and accounted for in the book!

I really enjoyed reading Meda's adventures. While the prologue was pretty disheartening, what with the destruction of a planet and all, but there were survivors, Meda among them. So there's that. And then there's her training as the Heir, and the life, like the assassins and needing protection and such. Made for a great read!

Also really enjoyed Meda and Perseus, they weren't supposed to fall in love, but they did. Her humour and the way she looked at life, and him being in a permanent state of Rage, but having learned to control it. They made an interesting couple!

The one thing that I wish we'd have gotten sooner, was how the whole Heir thing worked. It was explained, but almost 50 pages in. It was like, it's kinda like Star Wars and Naboo, with one picked from a group of royals from the various planets to be Heirs, around their teens, and that they weren't lifetime Kings and Queens, and it wasn't a matter of lineage,, the child of the current King and Queen would be the future ruler. There were bits and pieces of how it worked, but I wish we could've had the full explanation sooner. Because Meda is an exception, because of the prophecy and all!

Someone really wants Meda dead. And that causes a lot of problems, obviously. What with the prophecy that says she's supposed to die, that makes things more complicated, and more numerous. And it led to that ending that I have a bad feeling about, that something is going to go more wrong than it currently was!

Such a great book, and it had such a cliffhanger ending, and I want more!

Bio:
A Pacific Northwesterner by birth and disposition, Mara has lived in Washington DC, Oregon, Japan, and most recently the beautiful Pacific Grove, California, before returning to her roots in Seattle. By day she teaches history to unsuspecting teenagers, and by night she writes books and travels to far-flung places. She loves to be with animals, read, play sports, and drink more London Fogs than is likely good for her.