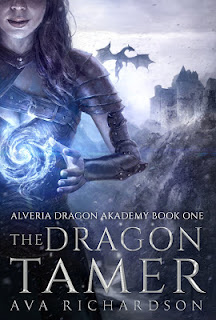 From Goodreads:
A kingdom divided cannot stand. For those caught in the middle, it means death.

For centuries humans and dragons existed side by side in Alveria, bonded by their care of one another. But no longer. After decades with no viable eggs, humans far outnumber dragons, and the survival of the species appears bleak. The outlook for everyday humans is little better as rogue dragons raid and torment villages. Yet it's far worse for the tamers, beaten and killed simply for serving the noble dragons.

But eking by at the bottom of Alverian society isn't any easier for seventeen-year-old Kaelan Younger. Harder still when her loyalty to the dragon crown is no secret. But when her dying mother reveals a horrifying truth about her identity, Kaelan is thrust into a world for which she is ill prepared.

Faced with a new life at the proving grounds for humans and dragons alike, Kaelan must reconcile not just her past but embrace the future laid out before her. When her responsibilities as an Akademy tamer collide with her feelings for a powerful dragon shifter, it will take everything she has to prepare for the coming danger threatening them both. The fate of the dragons she has sworn to serve rests in her hands.

Now Kaelan is no longer an outsider.

My Review:
I really enjoyed this book, it was a really quick read, and just sucked me in! I think I read it in less than 3 hours. The world building was excellent, and yeah, dragons, they're pretty darned cool, and I really enjoyed how the rules worked in this book!

I really connected with Kaelan, the unfairness of her situation just etched itself onto my nerves! The peasants hate the dragons, basically, and Kaelan didn't like that so her temper got her into a few rough spots. And then when she wasn't allowed to be a student, but a servant, yeah, that was awful!

There were two things that seemed minor in this book that I think that are going to turn out to be major. One is the stranger who she met, and two, the person who was sending her the packages. If you've read the book, I think you might see where I'm going with this-that I think that it's the same person, and that person is her dad.Yeah. I could be totally wrong, but that's my thinking. Oh, and I think that Kaelan could be able to become a dragon as well. Just a thought.

Thing that I can't wait to see in the future books are the changes in attitude, how nobles treat commoners, and how dragons treat everybody else since it's not right. Another thing is the lack of dragon births, and Kaelan's involvement in fixing that situation, because yeah, thinking she's gotta be involved! Also, I want to know why Mordon wanted to become king. For some reason, I think there's gotta be a reason beyond him wanting more power. Can't wait to hopefully find out!

This book was really fantastic, and I can't wait for the 2nd book!

Bio:
Ava Richardson writes epic page-turning Young Adult Fantasy books. She creates lovable characters and drops them into intricate worlds that are barely contained within your eReader. Her current work is the ‘Return of the Darkening Series’, which features Seb, Thea and their shared dragon, Kalax.

She grew up on a steady diet of fantasy and science fiction books handed down from her two big brothers – and despite being dog-eared and missing pages, she loved escaping into the magical worlds that those authors created. Her favorites were the ones about dragons; where they’d swoop, dive and soar through the skies of these enchanted lands.