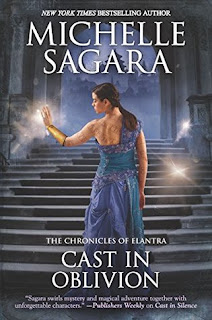 My Review:
Oh, wow, this book was just so great! We learned a lot about Barrani families and the politics within them, which is different from the politics as a race and as individuals. Family politics would fall in between those two.

The first big thing in this book was the dinner. I didn't know what to expect, and yeah, I gobbled up every word! There was a lot of information, things that were important, like a pivotal point in a Draconian/Barrani war,  and Spike was pretty important too, and I enjoyed learning about him, and of how different he is, and their difficulties understanding one another.

I absolutely loved having all of the cohort in Elantra. We really got to know the other members besides Annarion and Mandoran, well, and Teela, which was really nice, because they brought different personalities to the table.

Yeah, the shadow at the base of the High Halls, that's been a part of the series since the 2nd book. So yeah, facing off against it was pretty darned big! And Kaylin is her awesome self, muddling through the confusion, and finding different, better choices. So great to read!

Loved this book so much, and I can't wait to see where it leads! So excited for more!