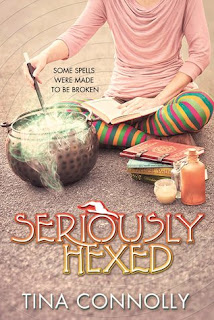 From Goodreads:
Tina Connolly continues the hilarious adventures of teen witch Camellia and her mother, wicked witch Sarmine, in this latest installment to the Andre Norton Award-nominated "Seriously Wicked" series.

Teen witch Cam has resigned herself to being a witch. Sort of. She's willing to do small things, like magically help her boyfriend Devon get over his ongoing stage fright. But tangling with other witches is not on her wishlist. Joining her mother's wicked witch coven is right out.

New acquaintance Poppy Jones is a Type A, A+ Student of True Witchery. She's got all the answers, and she's delighted to tangle with a bunch of wicked witches. She doesn't need any reluctant witch getting in her way, especially one who knows less than a dozen spells, and has zero plans for witch college.

Then a coven meeting goes drastically awry. A hex is taking down all thirteen members of the coven, one by one putting both girls mothers in jeopardy. Now the two teens are going to have to learn to work together, while simultaneously juggling werewolf puppies, celebrity demons, thirteen nasty hexes, and even nastier witches. They may have to go through hell and high water to save their mothers but they also might find a new friendship along the way.

My Review:
Oh, I really enjoyed reading this book! I've enjoyed this trilogy so much, and while I'm sad to say goodbye to these characters, they've set things up for a pretty good future!

This book was really fantastic, we got to meet Poppy, who was in about the same boat as Cam, being a teen aged witch, and actually wanted to be where Cam was, which caused some tensions. I really enjoyed watching them bicker. I also enjoyed her technology bent, it was very interesting and helpful!

The ending of this book was pretty fantastic! I loved how everything was brought together, and how they dealt with the wicked witches to free the good guys. How they changed the world so that the ones who were seen as resources for the witches had a say in the rules, which was pretty fantastic!

This book was so fantastic and I really enjoyed reading it!