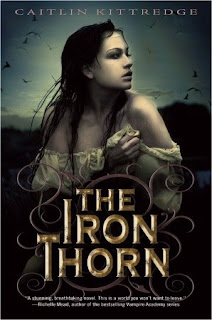 From Goodreads:
In the city of Lovecraft, the Proctors rule and a great Engine turns below the streets, grinding any resistance to their order to dust. The necrovirus is blamed for Lovecraft's epidemic of madness, for the strange and eldritch creatures that roam the streets after dark, and for everything that the city leaders deem Heretical—born of the belief in magic and witchcraft. And for Aoife Grayson, her time is growing shorter by the day.
Aoife Grayson's family is unique, in the worst way—every one of them, including her mother and her elder brother Conrad, has gone mad on their 16th birthday. And now, a ward of the state, and one of the only female students at the School of Engines, she is trying to pretend that her fate can be different.

My Review:
This was such a great book, the only reason why it took me 2 days was because it was the second book that I was reading that day, and that I (unfortunately) had to sleep, but I finished it soon after! It was so good, the writing was superb, the characters were so great, and the plot was original and full of new life!

Taking place in a very medieval world, but with electricity to keep the city going, Aoife has very few choices, her mom is in the insane asylum, and her brother was meant for one, but he ran away, but she's trying to outrun the family curse. Not knowing much about her father, she gets a note from her brother to come to the family house, and off she goes on a wondrous adventure, except there's death and destruction, and a very odd house that is perfect for her, because it has all these mechanical devices that can close off the house, and it's like the house is alive. Oh, and there's a guide who is very strange, and who intrigues her.

The action in this book, combined with the plot, and all the clues that they discover on their journey, it just added a whole bunch to the book, and it just keeps going and going, until they we have this understanding of the world that is totally shattered, and a new one, and that new one keeps changing!

This was an awesome book, with nonstop action, inflection, and learning! Great book! Read it! Check it out on Amazon!