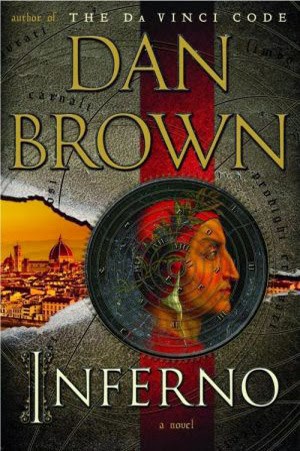 From Goodreads:
In the heart of Italy, Harvard professor of symbology Robert Langdon is drawn into a harrowing world centered on one of history's most enduring and mysterious literary masterpieces . . . Dante's Inferno.

Against this backdrop, Langdon battles a chilling adversary and grapples with an ingenious riddle that pulls him into a landscape of classic art, secret passageways, and futuristic science. Drawing from Dante's dark epic poem, Langdon races to find answers and decide whom to trust . . . before the world is irrevocably altered.

My Review:
So this is the first Dan Brown book that I've read in a while that I hadn't read before. So I had no idea what to expect, and that was really great, since the last time this happened, was the first time that I read The Lost Symbol, so that was really awesome!

So this book is different from the rest of them, because Robert's lost his short term memory. Which means that things are pretty confusing for him-and for us-in the beginning! And that he does things again that he'd done in the lost memory-because of the lost memory. So that was really great!

There were a lot of great twists and turns in this book, after all, it's a Dan Brown Robert Langdon book. And with the memory loss thing, well, things are more complicated then that. But I really enjoyed that twist with who was the one with the bad guy, because the way it was written, made it seem like it was a different person, so that was really great!

I read somewhere that in this book, the world changed pretty drastically in the end. And what with the "inferno" of the title, I thought that it was going to be some kind of a fire related incident. But it's not. But it's funny, reading this book, and also watching Helix, which season 2 is dealing with over-population being a problem, and infertility being the solution, which was really fantastic!

I enjoyed this book so much, and I know we need a 5th book! Though I'm wondering if we're ever going to bring all these characters all together, or at least some of them, because there's been a leading lady in each of them, and it'd be pretty interesting to see them meet!