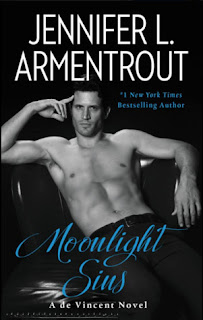 From Goodreads:
Julia Hughes has always played it safe until she learned a very painful lesson. Now Julia's starting over with a job in the Louisiana bayou—and a scorching encounter with a stranger, only to discover he's Lucian de Vincent . . . her new employer. The de Vincent brothers share a massive fortune and a dark reputation. Julia cares for their troubled sister, but a menacing presence in the mansion—and the ever-present temptation of Lucian—prove dangerously distracting.

Lucian's grandmother claimed de Vincent men fall in love once—and hard. Apparently, it's Lucian's turn. Julia's compassionate care of his twin makes Lucian want to lay himself bare. But some secrets are better for Julia not to know.

The recent "suicide" of Lucian's father is the latest in a string of deaths on the estate. Someone is eliminating the de Vincents. And the best way to get to Lucian may be through Julia. . .

My Review:
Oh, I loved reading this book! Jennifer L. Armentrout books are always fantastic, and I really enjoyed this start of this new series! It was dark, but it's not a supernatural book, no matter that the brothers have nicknames like Demon, Devil, and Lucifer!

The de Vincent family has a lot of secrets. Like their missing sister. And when their father dies-and while it looks like a suicide, there is potential that it's a murder. And that's the world that Lucian brings Julia into. So dark and atmospheric!

That the missing sister was Lucian's twin, and that she disappeared around when his mom died, Lucian has some conflicted feelings now that she's returned, though in an unresponsive state. Which yeah, just adds to the atmosphere!

There were a lot of bumps. From Lucian not feeling worthy, to the secrets getting between them, they didn't have it easy! And when the truth of the mysteries of this book are revealed, it's shocking, it's painful, and it was a delight to read, because I'm sadistic like that!

Such a great book, and I can't wait for Lucian's brothers' stories!