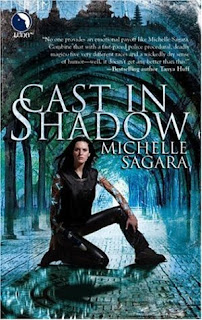 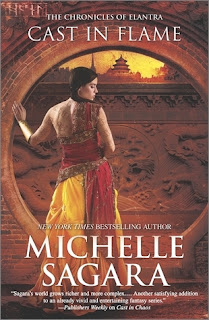 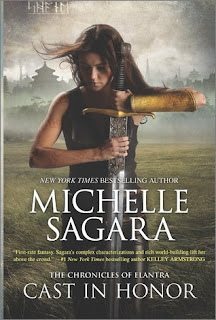 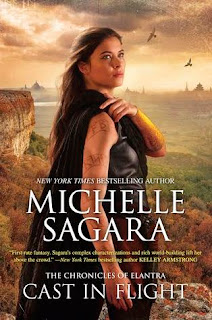 Private Kaylin Neya already has Dragons and Barrani as roommates. Adding one injured, flightless Aerian to her household should be trivial. Sure, the Aerian is Sergeant Moran dar Carafel, but Kaylin's own sergeant is a Leontine, the definition of growly and fanged. She can handle one Aerian.

But when a walk to the Halls of Law becomes a street-shattering magical assassination attempt on the sergeant, Kaylin discovers that it's not the guest who's going to be the problem: it's all of the people who suddenly want Moran dar Carafel dead. And though Moran refuses to tell her why she's being targeted, Kaylin is determined to discover her secret and protect her at all costs—even if keeping Moran safe means dealing with Aerian politics, angry dragons and something far more sinister.

My first review of Cast in Shadow, Cast in Flame, Cast in Honor, Cast in Flight
My second review of Cast in Shadow
My Review:
Because I just finished reading Cast in Deception, I had to go back to the beginning! I also had to read the books that I'd only read once, and with a year between them. It was just a pleasure, reading these stories again and finding out what I forgot, like Nightshade's portal entrance! I just didn't have time to read the whole series because I don't have that much time, so it was a bit weird to jump that much time, but dealable!

I meant to write this review sooner. But I wanted to check up on a detail, which meant that I read the first 200 or so pages of Cast in Deception again. Teehee. And Kaylin hasn't been to Nightshade's tower since Cast in Flame, when said tower was waking up. So it's going to be interesting when she goes back!

Really starting in Cast in Honor, we really get to start exploring shadow, and how it might not be what they thought it was, that it might be like an element, or at least, have some sentience, and maybe not all of it is bad. This was really interesting, and having read Cast in Deception, well, I know it's going to be explored further, so that's something to look forward to! I need more information!

In Cast in Flight, Helen makes a comment that the Emperor wouldn't really be suitable for Bellusdeo as a mate/father of eggs, because he has his hoard which much come first. They also went through rejecting the others, but weren't sure that they mentioned all of them. They didn't, they didn't mention Lord Emmerian. Who I think doesn't have any disqualifications like the rest, and who seems to get along well with Bellusdeo, so I think they'd be a good match!

These books were just so fantastic, and I wan't wait for more of this amazing, wonderful series!