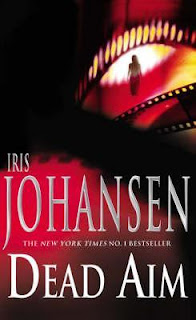 From Goodreads:
The #1 New York Times bestselling author Iris Johansen returns with an electrifying and all-too-plausible thriller that pushes the level of suspense to the maximum and never lets up. From the tense opening scene to the final explosive page, Johansen delivers a knockout novel, as an unlikely pair of allies must expose a team of killers hiding behind an unspeakable act of terror—and risk ending up their next target.

She witnesses death through the eye of her camera. Now a relentless killer is focused on her. A celebrated photojournalist, Alex Graham has seen it all—but her latest assignment has forced her across a dangerous line. What happens when a reporter does more than just report? She has recorded some of the most tragic and heartbreaking of catastrophes, everything from natural disasters to infamous acts of terror. Her experiences have left her forever marked with the human side of tragedy. So when a dam breaks in Arapahoe Junction, Colorado, Alex is once more at the site doing more than just snapping pictures—she is in the mud with a shovel digging for survivors.

What happens when the reporter becomes the story? Alex finds more than she bargained for. In one terrible instant, she is witness to a conspiracy that will stun a nation. The official story is just a cover-up for a truth so frightening, so unthinkable, anyone who threatens to reveal it must be silenced. Forever. And now that someone is Alex Graham.

The first attempt on her life is swift and brutal. Only barely escaping, she finds an ally in an improbable source. Billionaire financier John Logan has his own reasons for protecting Alex, and these reasons alone are likely to get her killed. Using his vast connections and influences, Logan assigns a bodyguard to protect her. Judd Morgan is the best covert commando in the business, and if anyone can keep Alex safe, it's this quietly dangerous man. The problem is, Alex doesn't want to be kept safe by Judd, whose checkered past has made him the target of an unseen assassin who dogs his every step.

My Review:
I just sped read through this book! It helped that it was only 170 pages or so on my Nook, so that was hardly anything for me to read! And really enjoyable, page-turning writing didn't hurt, either! Unfortunately the words aren't flowing so easily for me to write this review!

After No One to Trust, I wanted to know more about Judd, and I was really glad to have this book with his story! That he would do something that was pretty selfish, that could've harmed a child, was pretty awful. But he had helped them in in the end, and then there was this book!

This book is another presidential mystery, just like the first Eve book, Face of Deception! But not a bad guys to keep the power, but bad guys to get the power. Adding in Logan, and everything going on in this book, just made thing so much better!

Loved how everything came together, these characters had a few tricks up their sleeves to beat the bad guys, and with writing that didn't give away what was going to happen, that ending was just awesome and I loved it!

Another fantastic book, love this series, and I can't wait to read more!