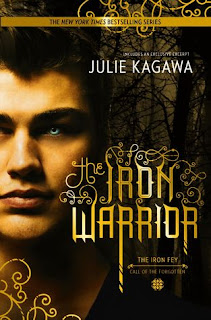 Waking after a month on the brink of death, Ethan Chase is stunned to learn that the Veil that conceals the fey from human sight was temporarily torn away. Although humankind's glimpse of the world of Faery lasted just a brief moment, the human world has been cast into chaos, and the emotion and glamour produced by fear and wonder has renewed the tremendous power of the Forgotten Queen. Now, she is at the forefront of an uprising against the courts of Summer and Winter—a reckoning that will have cataclysmic effects on the Nevernever.

Leading the Lady's Forgotten Army is Keirran himself: Ethan's nephew, and the traitor son of the Iron Queen, Meghan Chase.To stop Keirran, Ethan must disobey his sister once again as he and his girlfriend, Kenzie, search for answers long forgotten. In the face of unprecedented evil and unfathomable power, Ethan's enemies must become his allies, and the world of the fey will be changed forevermore.

My Review:
Oh, man, this book! It was so fantastic, it wrapped things up, and it's finally out after that evil, evil, evil cliffhanger that was The Iron Traitor! Though I do wish that it's title hadn't changed from The Forgotten Crown, because it goes better with The Lost Prince and The Iron Traitor then The Iron Warrior, repeating Iron!

So this book picks up pretty quickly after that evil cliffhanger, and then it dives pretty quickly into the action again, and that was just great! This book was pretty single-focused-find a way to save Keirran from himself, basically.

There was a lot of travelling, because this was a pretty important quest to be on, finding out how they could save him. Part of me was pretty mad with Tatiana, if she'd let Annwyl back into Faerie, then this all might not have happened-she would've been saved from Fading, and Keirran wouldn't have been giving up his soul to keep her here. That loss of a soul being why he was leading the Forgotten Army and all!

I enjoyed how things wrapped up, there were a few losses, and it wasn't a perfect ending, all happy lovely dovey, there were consequences, but they were mostly ones that could be lived with. So it was a really enjoyable ending!

It'll suck to say goodbye to these characters, but hey, at least we got this spin off series!