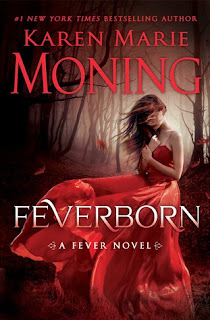 From Goodreads:
In Karen Marie Moning's latest installment of the epic #1 New York Times bestselling Fever series, the stakes have never been higher and the chemistry has never been hotter. Hurtling us into a realm of labyrinthine intrigue and consummate seduction, FEVERBORN is a riveting tale of ancient evil, lust, betrayal, forgiveness and the redemptive power of love.

When the immortal race of the Fae destroyed the ancient wall dividing the worlds of Man and Faery, the very fabric of the universe was damaged and now Earth is vanishing bit by bit. Only the long-lost Song of Making—a haunting, dangerous melody that is the source of all life itself—can save the planet.

But those who seek the mythic Song—Mac, Barrons, Ryodan and Jada—must contend with old wounds and new enemies, passions that burn hot and hunger for vengeance that runs deep. The challenges are many: The Keltar at war with nine immortals who've secretly ruled Dublin for eons, Mac and Jada hunted by the masses, the Seelie queen nowhere to be found, and the most powerful Unseelie prince in all creation determined to rule both Fae and Man. Now the task of solving the ancient riddle of the Song of Making falls to a band of deadly warriors divided among—and within—themselves.

Once a normal city possessing a touch of ancient magic, Dublin is now a treacherously magical city with only a touch of normal. And in those war-torn streets, Mac will come face to face with her most savage enemy yet: herself.

My Review:
This book! Oh man, it was just so great! Another fantastic book in this series that it just so incredible, and just keeps getting better! After the cliffhanger ending of Burned, this book was something of a need to read-I had to have more!

This book dealt with a lot of the threads that carried on from Burned. And then it mentioned some of the others, though I don't think all of them were. But I know that they'll be a part of Feversong! And I can't wait to read them!

One big part of this book was dealing with what was left of the Hoar Frost King's leftovers, or regurgitated messes. Because the black holes could wipe out the earth, and that would be really bad, since the Nine (well, now Ten) died on earth (though as pointed out in a Q&A, that doesn't mean that the original Nine were born on earth!

Another thing this book brought up was Mac's fear that she'd never gotten free of the Sinsar Dubh and all that was happening was just part of the illusion. Which is kinda freaking scary, but since we have POV's of other characters, well, we know that's unlikely, but Mac doesn't have that!

A lot happens in this book, and all the little bits are starting to come together (though it hasn't taken it's true shape) and it was just so fascinating to read, why things happened, what's going to happen as a result of them, what was revealed, and, oh, yeah, THAT CLIFFHANGER ENDING!!!!! That was just evil! I need more!

Such a fantastic book, and I really, really need Feversong! Which might not be the end of the series, yeah, but just the end of this story arc! Yeah! Though apparently this is not set in stone. Boo. I want and desperately need more!