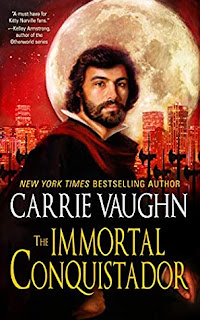 From Goodreads:
From Carrie Vaughn, author of the beloved Kitty Norville werewolf talk-show host series, comes the vampire origin story of Kitty's famed ally, Rick—and his sudden turn to darkness in the seventeenth century. More than 500 years before his friendship with Kitty, noble Ricardo de Avila's life met a fate-changing twist, and his morally-complex, blood-soaked existence as an immortal began.

Before being turned, Ricardo de Avila would have followed Coronado to the ends of the earth. Instead he found the end of his mortal life—and a new one, as a renegade vampire.

For over five hundred years as an immortal, Ricardo has followed his own moral code, upsetting the established order in the demon world. He has protected his found family from marauding evil, joined up with a legendary gunslinger, tended bar, appointed himself the Master of Denver, and discovered a church buried under the Vatican.

The life of a vampire is frequently long, but for Rick, it is never easy.

My Review:
I really enjoyed reading this book! I didn't know what to expect, but I didn't realize, that this was really a bunch of novellas, with a bit of narration between, of what's going on in the present, as those stories told his history. So it was a much quicker read than I was expecting.

In the present, this is after Rick has left Denver, but before the ending of the series. So we see the gaps of what we don't know, which is basically everything but the time he was in Denver during the series, both before and after. So that was really great to read!

We first had the story of how Rick became a vampire, and as became a theme in this series, Rick doesn't know what vampire should and shouldn't do, so he does the unexpected, and yeah, there are plenty of times in the present where he shocks his audience. Of course, he shocks his participants of the stories when they were happening as well. It was pretty hilarious!

Part of being a vampire if living a long time. And he sees some losses along the way, and has many adventures. The one where he met Doc Holliday was an entertaining read, as well as when he became Master of Santa Fe for a month. So many adventures! And there was one part of the story, which Rick finds great delight in, because of the ramifications, and I'm so glad for him, that he has that validation!

This was a fantastic read, I enjoyed it so much, and yeah that we're getting more from this series with Kitty's Mix Tape!