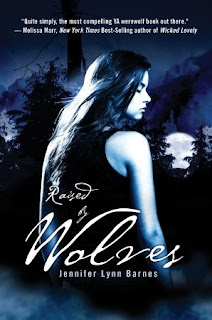 My Review:
Oh, oh, oh, man, this was such a great freaking great book, it's totally going on my most favourite of books list, because man, it was engaging, it was entertaining, and it was such a page turner, I can't really believe it, but yeah, I just had to read more and more and more and more, and then it was done and I still wanted more, so I'm going to read the next 2 books really soon, I hope!!!

I loved these characters, Bryn, who's as the title says, was raised by wolves, so yeah, she's had a pretty unique childhood, and that her parents were killed by a Rabid werewolf, and then suddenly there's a boy on the property, who's been made into a werewolf-by the same Rabid that killed her parents, well, that starts something up.

And I loved Chase, because yeah, he's the boy that got turned into a werewolf, and he's very loyal to Bryn, and to the pack they start, when she claims him, and yeah, that their pack grows and grows, with Devon, and Lake, and then in the end, almost exponentially, except in one large group...yeah.

Then the ending? That Bryn is a now an alpha, of the only werewolf pack that has more females then males, and that has more then 5 females, total! And most of them aren't even adults. So yeah, there's that, and it had it open for more books, and yeah, I just loved that, that we're getting a series about human Bryn, in a werewolf world!!!

I really loved these book, and I can't wait to read more, because it was so great!!!