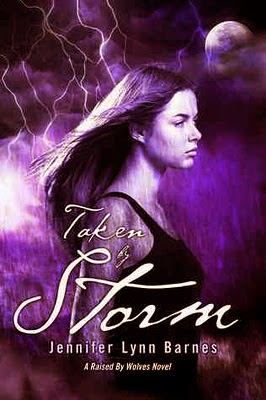 My first review of Taken by Storm
My Review:
Oh, this was such a heartbreaking, wonderful book! I mean, it has so many things, like worry that it's Maddy who's the rabid, and then when it turns out who it is? The same rabid that turned Maddy, Chase, and the majority of Bryn's pack. So there was that.

There was also the fact that Maddy's pregnant, and due to give birth any day. And that Shay, and the other Alphas, want Maddy, because she's a female werewolf, and very valuable. And then there's the whole twin werewolves, and the only reason why there were female werewolves, because there was a male twin in the womb keeping the female alive. Guess who turns out to be the rabid's twin?

None other then Devon and Shay's mom. And that the only way to kill the rabid is to kill the living twin. Or is it? Because the living twin can hurt the dead twin, so that was a relief! And then there was all the deaths in the end.

I really hated Shay then, that he had Jed killed, and then had Chase killed. And was willing to let Maddy's baby die. A female werewolf, born by herself, and yet, still alive. That just goes to show just how evil he was.

But Bryn defeated him in the end, and Devon killed him, and took over as Alpha for his pack. So that was a bittersweet ending. Oh, and with the absolute ending being Byrn being turned? Yeah, I really want a second arc with Byrn as a werewolf!!!

I loved this book, and yeah, like I said, I really, really, really want to have more books in this series, more books about Byrn and her pack, to see how she was a werewolf, how it was different, because yeah, that's interesting stuff!!!