Week 9 Review: Beyond the Highland Mist 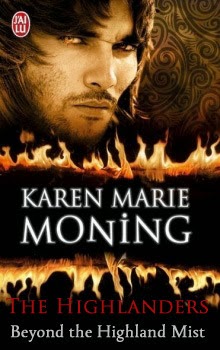 From Goodreads:
He would sell his warrior soul to possess her. . . .

He was known throughout the kingdom as Hawk, legendary predator of the battlefield and the boudoir. No woman could refuse his touch, but no woman ever stirred his heart—until a vengeful fairy tumbled Adrienne de Simone out of modern-day Seattle and into medieval Scotland. Captive in a century not her own, entirely too bold, too outspoken, she was an irresistible challenge to the sixteenth-century rogue. Coerced into a marriage with Hawk, Adrienne vowed to keep him at arm's length—but his sweet seduction played havoc with her resolve.

A prisoner in time...

She had a perfect "no" on her perfect lips for the notorious laird, but Hawk swore she would whisper his name with desire, begging for the passion he longed to ignite within her. Not even the barriers of time and space would keep him from winning her love. Despite her uncertainty about following the promptings of her own passionate heart, Adrienne's reservations were no match for Hawk's determination to keep her by his side. . .

My Review:
Wow. Such an amazing, amazing, amazing, wonderful book! And I got to play duck duck goose with descriptive words! What didn't I like? Nothing about this book, because it has a sassy from our times heroine, and a Scottish hero from medieval times. Oh, and the Fae, playing games with their lives, for example, bringing Adrienne to Hawk.

Adrienne was awesome, just spectacular, the way that she deals with all the trauma of her past, and her ex-fiancé, and then being brought back in time, and yeah, all that, because yeah, those aren't things that'd be easy to go through, speaking from no experience in all, just a bit of common sense.

What I loved about this book, was that while it was a historical romance, mainly, it split off from that with the paranormal, and yeah, more then that, it wasn't just about the romance, but the friends that she made, and there was an attempt to make coffee, that ended pretty disastrously, and I, someone who hates the smell of coffee, felt bad for the beans!!

The whole, she says no to him, to his kisses, to his touch? That was part of the wish that his friend made, that the Fae capitalized on, because they thought that their Queen had slept with Hawk. Yeah, they're pretty vindictive, but then when he was doing the thing to bring her back, with Adam Black, and he had this laundry list of a whole sentence, that he'd been talking for hours, and yeah, that was pretty funny!

Yeah, this was a hilarious, wonderful book, and I just loved it to bits, can't wait to read more of this series!!