Week 13 Review: The Girl With the Windup Heart 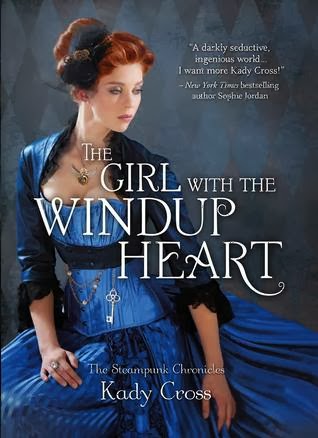 From Goodreads:
In 1897 London, a final showdown is about to begin.

London's underworld is no place for a young woman, even one who is strong, smart and part-automaton like Mila. But when master criminal Jack Dandy inadvertently breaks her heart, she takes off, determined to find an independent life, one entirely her own. Her search takes her to the spangled shadows of the West End's most dazzling circus.

Meanwhile, taken captive in the Aether, Griffin King is trapped in an inescapable prison, and at the mercy of his archenemy, The Machinist. If he breaks under the hellish torment, The Machinist will claim his powers and control of the Aether itself, and no one in either world will be safe-especially not Finley Jayne and her misfit band of friends.

Finley plunges headlong into the Aether the only way she knows how, by temporarily dying. But she cannot parry The Machinist's maneuvers for long. To defeat him for good, Griffin will have to confront his greatest fear and finally come face-to-face with the destructive power he wields.

My Review:
I loved this book. It's a great series, and it just has so much, and it far surpasses its potential, I mean, a crime-solving/save the world team made of members with special talents a century ago, when class was much more ridged and formal? Yeah, and kick-ass females weren't appreciated, and thought lesser, or that there was something wrong with them.

And since this series has so many, with different strengths of kick-ass, from Finley, Emily, Mila, and Wildcat? Because the characters are really great, and if they came off the page, alive, I wouldn't even think they were once fictional, because they were so good!

Romances! All the girls in the series that we know beyond a few mentions or a few appearances, and that aren't dead like Mei, now have significant others, partnerships that are so adorable, and are just right for all of them!

Finley got to meet her dad, and we finally find out who killed the lord, the one that Finley could have been accused of murdering, and she also faces his ghost, and yeah, it was great to have that chapter closed and sealed! Also, Griffin grows completely in his powers, which was pretty spectacular-what a light show! So excellent!

Freaking amazing book! I loved it, and I really hope there's a 5th book, because I really want Finley and Griffin show off their romance to his peers, just because! I'm petty like that. And if they get married, would the girl from the 1st novella, be invited to the wedding? Hmm...