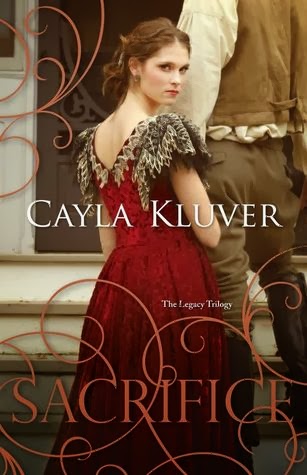 From Goodreads:
This is not the time for the fight to end. Now is when the fight will begin. This is the time to regain what has been lost.

Queen of a fallen kingdom, secretly in love with the enemy.

Daughter of a murdered father, rebel with a cause.

One lives behind the former Hytanican palace walls and walks the razor's edge to keep the fragile peace in her beloved homeland. The other slips through the war-torn streets, seeking retribution for her family's tragedy, following whispers of insurgency.

Both face choices that will separate them from those they cannot help but love. As their stories intertwine, a conspiracy ignites that may end in slavery or death—or lead to freedom anew, if only each can face what must be sacrificed.

My first review of Sacrifice
My Review:
Oh, my, such a wonderful, amazing book! I love this world, these characters, and this author, because she writes such great books and are freaking addictive!!! I mean, I love Alera and Narian, and the love triangle that they had with Steldor, and this book was set after they dealt with that, mostly, I mean, there were some twinges, especially on Steldor's side.

There were a lot of deaths in this series, and in this book specifically, a lot of pain and loss, from almost all of the Royal guards, to Shaselle's dad, to Cannan, that one was even more heart-wrenching, because Steldor only had his mom as his immediate family. Or the scene where Steldor was whipped? That was horrible, and not fun to read, at all.

I loved the pranks that Steldor and Galen and Co. pulled, like the rules, that mocked the Corkians, and was just hilarious, and to the point where Shaselle went to do a prank, and painted the horses Hytanican Blue, and then got caught? Yeah, there was some conflict there!!!

What the Cokyrian Empress did to Narian, well, that was horrible, but we did learn a bit about his childhood while they were there before the whole poisoning happened, because it was all around them, where he had lived and grown up, and yeah, I just loved that part, because it was interesting, that there was still things to learn about these characters at the end of the series, that there is hope for the future, that was just awesome!