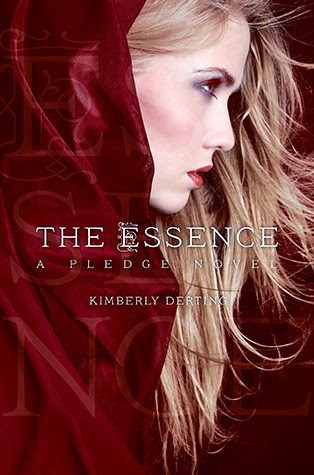 From Goodreads:
At the luminous conclusion of The Pledge, Charlaina defeated the tyrant Sabara and took her place as Queen of Ludania. But Charlie knows that Sabara has not disappeared: The evil queen's Essence is fused to Charlie's psyche, ready to arise at the first sign of weakness.

Charlie is not weak, but she's being pushed to the brink. In addition to suppressing the ever-present influence of Sabara, she's busy being queen—and battling a growing resistance determined to return Ludania to its discriminatory caste system. Charlie wants to be the same girl Max loves, who Brook trusts, but she's Your Majesty now, and she feels torn in two.

As Charlie journeys to an annual summit to meet with leaders of nearby Queendoms—an event where her ability to understand all languages will be the utmost asset—she is faced with the ultimate betrayal. And the only person she can turn to for help is the evil soul residing within.

My first review of The Essence
My Review:
Oh, I loved this book! So good, and while I didn't enjoy it as much as The Pledge (again) it was still a very excellent book! I mean, we find out more about Sabara, including her original name, Layla, and her first switching of bodies, with her sister, and the love of her life, Niko, who has a different brand of immortality than her.

We get a better look at the world, from the Scablands, to the other kingdoms, a bit, and the queens, and that was interesting, and how long that Ludania was cut off because of Sabara. But things were most hard for Charlie, because people protested the changes she was making, to the point of killing kids because they didn't deserve to go to school with them, to a another queen trying to murder her, to her losing control of Sabara and Sabara killing a queen.

The ending was chilling, a  bit, what with her using one of Sabara's powers to kill enemies all on her own without Sabara taking over. And having everybody find out that Sabara's still in Charlie. Yeah. Not the best start of the day events!

Brooklynn, and Aron, both friends of Charlie, form a new bond in this book, of romance, and yeah, it was really sweet to read about it, and I hope it gets to grow and evolve in the next book, and not die from one of them dying!!!

Yep, this was a great book, and I want to read the Offering really, really soon!