Week 43 Review: Kiss of the Highlander 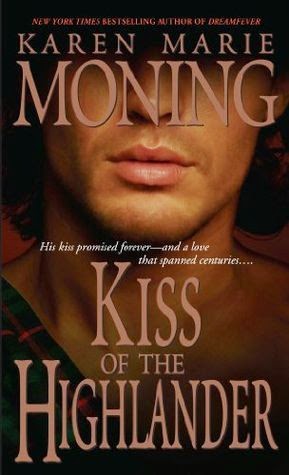 From Goodreads:
A laird trapped between centuries...

Enchanted by a powerful spell, Highland laird Drustan MacKeltar slumbered for nearly five centuries hidden deep in a cave, until an unlikely savior awakened him. The enticing lass who dressed and spoke like no woman he'd ever known was from his distant future, where crumbled ruins were all that remained of his vanished world. Drustan knew he had to return to his own century if he was to save his people from a terrible fate. And he needed the bewitching woman by his side...

A woman changed forever in his arms...

Gwen Cassidy had come to Scotland to shake up her humdrum life and, just maybe, meet a man. How could she have known that a tumble down a Highland ravine would send her plunging into an underground cavern -- to land atop the most devastatingly seductive man she'd ever seen? Or that once he'd kissed her, he wouldn't let her go?

Bound to Drustan by a passion stronger than time, Gwen is swept back to sixteenth-century Scotland, where a treacherous enemy plots against them ... and where a warrior with the power to change history will defy time itself for the woman he loves...

My Review:
Another great book to read! And yeah, seeing as I've just started reading Outlander, and now reading this, yeah, that was awesome, the similarities, Scotland, and time travellers, and it was easy to see that these were 2 different series, but I just noted those similarities! I mean, Inverness is mentioned in this book!

Oh, I really enjoyed his struggles with modernity, from cars, to clothing. The clothing, how he didn't like jeans or shoes, because they restricted the pieces of human flesh they contain, and keep them from growing to the max possible. And that he thought her thong was a hair thing! So cute!

Or how, in the beginning, they're in the 21st century (though early, because this was dated in the fact that Brad Pitt wasn't with Angelina Jolie yet and this was mentioned by Gwen's bangs) and how she thinks he's crazy. And then they travel back in time, and he's joined in the body of his past self, and past self doesn't want him, so doesn't have future self's memories. So then he thinks she's crazy. And yeah, I just loved that reversal, of how things switched on them with the travel back in time! So cute!

Or the sub plots of romance in the older generation. It was in the first book, with Hawk's mom, and yeah, that was really cute, and now Drustan's dad, yeah, having their romance, it's nice and sweet, and adds to the book!

Favourite lines: "...wondering where he'd found the lemon polyester shirt and the golf-turf-green trousers that clashed painful with his white leather dress shoes and tartan socks. Completing the rainbow ensemble, a red wool cardigan was neatly buttoned above his paunch." That is quite a rainbow of colours in various articles of clothing! "...wondering if her lilac bra showed through her white tank top." Which would kinda suck! But proves Beatrice's statement nicely! "Small she might be, a basketball she was not." Nope, humans aren't basketballs! "DROPOUT DAUGHTER OF WORLD-RENOWNED PHYSICISTS ABDUCTED BY ESCAPED MENTAL PATIENT. SUBTITLED: SHE SHOULD HAVE LISTENED TO HER PARENTS AND STAYED IN THE LAB." Well, not exactly! "Touch me, lass. Feel my sock." Because she thinks that it can't be just him in there. Just too hilarious! "When he flattened his palms roughly over her breasts, her thighs popped open so smoothly that she wondered why she didn't just have a placard taped across them that said SQUEEZE HERE FOR SEX." Well, probably because then some people might take advantage of that! "He was breathtaking, and he had a remarkable amount of mass that she had not been factoring in her equation of why she was orbiting him, but she certainly would be in the future. It explained a great deal." Yep, it does! "Gwen was quite certain of that, having never been tooped before." That would be a good explanation! "He said foolish things, heartfelt things, deep and weighty things he could never acknowledge otherwise. He called her his goddess of the moon and praised her courageous spirit and fire. He asked her for babies. Christ, he talked like a fool." But it's just so cute! "Fear him? Why would she have feared him? Because he could manipulate time? Sheesh, that only increased her fascination with him!" All his worry, for nothing! "Many were the times she'd wondered how he'd managed to get sons on his wife. Had the woman slammed his tomes shut on his fingers sand dragged him off by the ear?" That might work! "No simple cherry picker for me, she thought. I get a time-traveling genius who comes with a world of problems and sends me back through time to fix them." Which isn't so fun for her! "And mayhap his wolfhounds would take to sailing longboats across the loch, sporting Viking attire. Waving flags of surrender. Ha." Yeah, not likely to happen, this, and the whole marriage fantasy thing! "Silvan had chuckled when he'd told her that if Drustan refused to listen, he and Dageus would do their best to bar him in from the outside by hammering a plank or two over the doors." That's a bit extreme, but it might come to that! "Have you never seen a horse before, lass? They doona answer to 'horse.' They have no idea they are horses. 'Tis like sauntering into a forest, saying 'Hear, bar, bar, bar. I should like to roast you for dinner.'" This is pretty true! "Her Sunday comics (neatly removed from the paper before she ever got to it) had consisted of her father's witty draws of black holes sucking up all the Democrats who preferred to fund the environment over the Department of Defence's obscenely expensive research projects." Both sad, and pretty funny! "One didn't rhapsodise about quarks and neutrons and black holes during happy hour at Applebee's with insurance adjusters." Nope! "Have you thought of that, O wise one?" Probably! But like his son said, he likes to play a lot of games! "Chaos had stormed his castle, dressed in lusciously low-cut gowns, silky slippers, and ribbons, Drustan brooded, raking his hair back and tying it with a leather thong." Too bad! "He'd be forced to escape out the window. Halfway down he'd slipped, crashed the last fifteen feet to the ground, and landed in a prickly bush. Since he'd not had time to don his trews, his manly parts had taken the brunt of his abrupt entry into the bush, putting him in a foul mood indeed." It's your own fault, though! "Now his life was ordered about her schedule and how to avoid her." So cute! "More thus. Soft cursing. Good, she mused. Perfect. She and Silvan exchanged smug grins." This is going to be hilarious! "Trapping the laird of the castle in his own garderobe appealed to her sense of humor." Mine, too, and I was right! "She soon found out she'd woefully underestimated how bad 'the worst' could be." and "Yet another part of him met the fact with a kind of glad resignation. She wanted battle? Battle she would get." More, more, more! "Ahem. Do you know you just married me, lass?" Nope! "Apologize later. Kiss now!" Agreed! "As much as you spied on me, I watched you. And had you stopped, I like as not would have begun stalking you instead." Aw, they're so cute! "Hmm, she thought. Seems they finally came to their sense, without my help. She might have been mortified had she known just how she'd helped them." Yeah, she just might be! "Stop that! Kiss her cheek if you wish, but doona be kissing those lips. They're mine." Well, you finally got together, Silvan and Nell! "She'd been having a marvellous dream in which Drustan was waking her by making love to her. Dimly, the realization penetrated-at the same moment he did-that it was no dream." They are so cute! "Might I remind you, that disgusting look heralded the advent of your wee life." Which is not what a kid wants to hear from their parents!

Such a great book, so enjoyable, and yeah, I wish it hadn't taken me so long to read it, because not only did it delay reading this, but also the rest of the series! And I just loved it so!