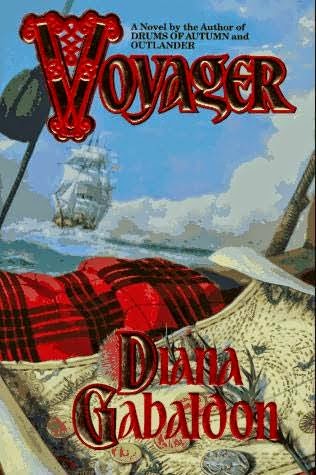 From Goodreads:
From the author of the breathtaking bestsellers Outlander and Dragonfly in Amber, the extraordinary saga continues. Their passionate encounter happened long ago by whatever measurement Claire Randall took. Two decades before, she had traveled back in time and into the arms of a gallant eighteenth-century Scot named Jamie Fraser. Then she returned to her own century to bear his child, believing him dead in the tragic battle of Culloden. Yet his memory has never lessened its hold on her... and her body still cries out for him in her dreams.

Then Claire discovers that Jamie survived. Torn between returning to him and staying with their daughter in her own era, Claire must choose her destiny. And as time and space come full circle, she must find the courage to face the passion and pain awaiting her...the deadly intrigues raging in a divided Scotland... and the daring voyage into the dark unknown that can reunite or forever doom her timeless love.

My Review:
I loved reading this book so much! I mean, I'm kinda addicted to Jamie and Claire's story between the show and the books, and yeah, just addicting, I just had to read it! And I loved it so much! I mean, so much happens, because it's 1000 pages long, of course a lot of things happen!

Comparing the plots of these 3 books, so far, Voyager is most like Outlander, in that it's more chronological, as much as a time travelling series can be! The beginning, starting with Jamie after Culloden, and then bits of Claire and her group finding out his journey, each step getting to see how it is for Jamie and Gray, who's with him. And then Claire with Jamie, mostly, for the rest of the book!

The main mystery is, the treasure that was meant for Prince Charles. The $50,000 that was promised, by the duke. And that Jamie knows where it is. Oh, and the various lives that Jamie lives as a printer, a smuggler, printing legitimate things, and also seditious things, and then smuggling in alcohol. Combined with the fact that he was/is a Jacobite traitor, in the eyes of the English, that makes him a pretty big pay day for whomever catches him!

Loved Claire and Robert's theory about the loch monster-that there's a time travelling hole like the one that Claire went through, like Claire says, prehistoric creatures tend to look like monsters, it would account for different creatures, and how they could back to their own time, and how there might not be one in the lake. Love this theory! So awesome!

So there's two characters that Claire thinks are too old to be alive-Jared, and Ned Gowan, and yeah, when she expresses her thoughts that they're alive, she gets this sayings that it'll take some part of the work that they do (being put in a barrel, getting the ax) for them to actually die. I enjoyed that!

And then there's Gellis, who blackmailed Dougal into letting her live, and she comes into play in a weird, unexpected place, and then add in Lord John Gray-who married the sister of the mother of Jaimie's son, yeah, life is very complicated there, even if they've just arrived!

And then Marsali and Fergus's wedding, which was just hilarious, from the people attending, to the one part, where Father Fogden tries to marry her to the cook, Murphy (who Fogden's dog was trying to "copulate" with his wooden leg) and then Maitland, before being shown that it was Fergus she was marrying!

And the ending, landing in America, where while not where they were intending to go, is a good place for them to end up, they can go by their own names of Jamie and Claire Fraser, and yeah, have a good life, though a busy one, what with another 5 more books after this one!

This was such a fantastic book, next to read the Lord John Gray series before reading Drums of Autumn! I can't wait!