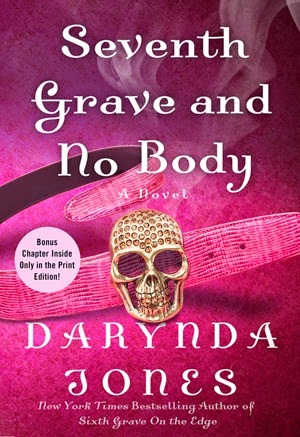 From Goodreads:
Twelve. Twelve of the deadliest beasts ever forged in the fires of hell have escaped onto our plane, and they want nothing more than to rip out the jugular of Charley Davidson and serve her lifeless, mangled body to Satan for dinner. So there's that. But Charley has more on her plate than a mob of testy hellhounds. For one thing, her father has disappeared, and the more she retraces his last steps, the more she learns he was conducting an investigation of his own, one that has Charley questioning everything she's ever known about him. Add to that an ex-BFF who is haunting her night and day, a rash of suicides that has authorities baffled, and a drop-dead sexy fiancé who has attracted the attentions of a local celebrity, and Charley is not having the best week of her life.

A tad north of hell, a hop, skip, and a jump past the realm of eternity, is a little place called Earth, and Charley Davidson, grim reaper extraordinaire, is determined to do everything in her power to protect it.

My Review:
Wow. I mean, words can describe how much I loved this book-I read it on it's release date, for one-but I don't think I can come up with all of the ones that I need to properly describe this! Because hey, I wanted this book so badly and then I got it, happiness!

So many funny things! Like because of Beep, she can't have caffeine, so she starts having decaf coffee, and then starts calling it Satan's blood. Just so Charley! And yeah, just calling her baby, Beep, is just so cute, because currently under the size of a black eyed pea! Yes. Love!

Their couples argument in the crime boss's place? So hilarious! They're talking about the supernatural right in front of the guy, and yeah, just hilarious! Though they could've done it in another language or something.

That ending? Stabbing herself with Zeus, seeing an angel, and then pushing away the hell hounds? And then being stronger then ever? And then finding out that her dad died? Because he was tailing the people watching her-the Vatican. And that the angels aren't happy about the people that she healed? Yeah. Such an amazing, heart wrenching, packed ending!

Favourite lines: "I often question my sanity. Occasionally it replies." Yeah, love how they twisted that! "If the woman howling from the backseat of Agent Carson's black SUV weren't already dead, I would've strangled her. Gladly. And with much exuberance."

"I suddenly felt the need to explain that night with the chess club, It was all a blur, but I was certain of one thing: Chad Ackerman's tattoo of a female impersonator was not my fault. Not entirely."

Yep. Awesome book, check, read it, check, waiting desperately for the next book which doesn't come out till May, check. Anything else?