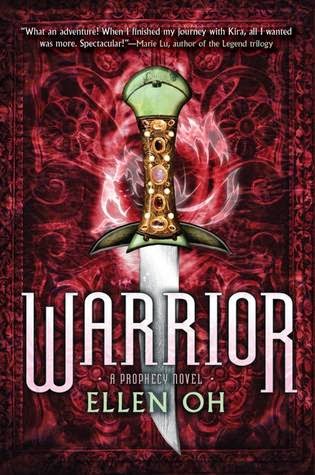 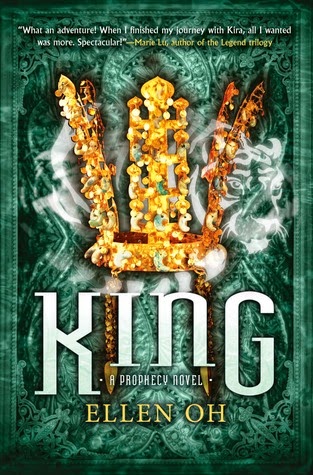 From Goodreads:
Warrior is sure to appeal to fans of the Ranger's Apprentice and Eon.

Kira, the yellow-eyed demon slayer who protected her kingdom in Prophecy, is back . . . and her dramatic quest is far from over. After finishing Ellen's first novel, Prophecy, School Library Journal said they were "ready for a sequel." Well, here it is! Filled with ancient lore and fast-paced excitement, this page-turning series is perfect for fantasy and action fans.

Kira has valiantly protected her kingdom—and the crown prince—and is certain she will find the second treasure needed to fulfill the Dragon King's prophecy. Warrior boasts a strong female hero, romantic intrigue, and mythical creatures such as a nine-tailed fox demon, a goblin army, and a hungry dragon with a snarky attitude.

From Goodreads:
Girl warrior, demon slayer, Tiger spirit of the Yellow Eyes—Kira is ready for her final quest. In this thrilling finale to the Prophecy trilogy, fans will get even more of the fierce Kira and her quest to save her kingdom!

All eyes are on her. Kira, once an outcast in her home village of Hansong, is now the only one with the power to save her kingdom. She must save her cousin, the boy fated to be the future king, uncover the third lost treasure, and face innumerable enemies in order to fulfill the famed prophecy.


Kira braves a sea of tigers and battles armies of demons as she musters her inner strength and learns to trust herself, the romantic feelings for Jaewon that are growing within her, and the destiny that must be hers.

My Review:
Wow, I really enjoyed these books! Warrior was not really an action book, more of a mental journey, coupled with the journey to find the knife. And then King was everything that I wanted it to be-finding Jaejo and the belt, and then the final battle! So good!

On thing I have to say, is that I wouldn't want to be in the group that Kira and Jaejo travel in! If you're not part of the inner circle-or become important to them, very quickly-then you don't last the book. First it was the soldiers loyal to Jaejo, then Shin Bo Hyun's rebel forces, and then the guys from Jaewon's home villege (though, to be fair, the ones left alive where sent back, they didn't all die.) Yeah, because the only ones there, near the end, are Kira, Jaewon, Jaejo, Brother Woojin, Seung, Major Pak, and the new addition in Warrior, Shaman Won.

Warrior brought up an sad thought from Brother Woojin, which quoted in my first favourite line, that he doesn't really see how things are, and yeah, at first, I was exicited in Prophecy that Kira and Jaejo would share the prophecy, but Shamon Won points out that Kira is more important then Jaejo, who isn't actually part of the prophecy, but just benefits, and that there can be another king, but there can't be another Dragon Musado.

Loved her Dokkaebis army! So cute, and awesome, and how useful it was, and there was Gom, her closest one, he was just so darned cute! And then Nara, the 9 tailed fox, Kira's first female friend, she was awesome, and helpful, and I really enjoyed her!

My one complaint, is that the final battle was just a little bit off, because a greater threat comes into play, and Kira just ignores it, and goes after the Daimyo, and then goes after the bigger threat. And it's over too quickly, like, it was almost too easy. I wish we could've had more time there, to make it more satisfying!

Favourite lines of King: "Even recognizing that the gil is the Dragon Musado, your mind seeks a more acceptable interpretation. That she is only part of the prophecy instead of hte only one. She is only relevant to you as the prince's protector. But what you fail to recognize is that everything is irrelevant without her." Kira, remembering what the shaman said in the last book. Seeing as there's a  choice between her life, and Taejo, after the ending of Warrior. Yeah. Not fun! "'Don't worry,' Jaewon cut in. 'I'll be with her.' Kwan gave Jaewon a dirty look. 'That's what I'm afraid of.'" Yeah, your single sister is going off with a guy! Poor you! "That sounded suspiciously like a backhanded proposal." Which would be kinda cute for us!

Such a great series, and yeah, it was great to just read them back to back, just made it especially good, and now I can't wait to read what she writes next!