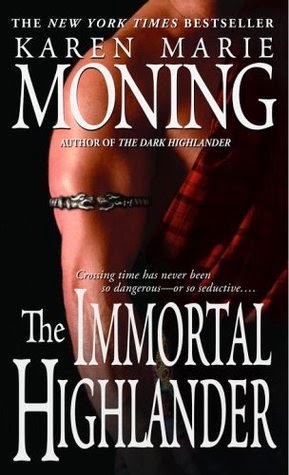 From Goodreads:
BEWARE:
LETHALLY SEDUCTIVE ALPHA MALE OF IMMENSE STRENGTH AND DARK EROTICISM. DO NOT LOOK AT HIM. DO NOT TOUCH HIM. DO NOT BE TEMPTED. DO NOT BE SEDUCED....

With his long, black hair and dark, mesmerising eyes, Adam Black is Trouble with a capital T. Immortal, arrogant, and intensly sensual, he is free to roam across time and continents in pursuit of his insatiable desires. That is, until a curse strips him of his immortality and makes him invisible, a cruel fate for so irresistible a man. Now Adam's only hope for survival is in the hands of the one woman who can actually see him.

Enter law student Gabrielle O'Callaghan. For Gabrielle, cursed with the ability to see both worlds, Mortal and Faery, it is the beginning of a long, dangerous seduction. But as Adam's quest to regain his immortality plunges them into a world of timeless magic, the price of surrender could be their very lives. Unless they can thwart the cosnpiracy that threatens both Mortal and Faery realms...and give them a shot at a destiny few mortals ever know: glorious, wondrous, endless love...

My Review:
I just absolutely enjoyed reading this book! For me, it's the one that really started to merge the Highlander series with the Fever series, and since they are in the same world, it's good to have that happen!

So yeah, Gabrielle is a sidhe seer? like Mac, but unlike Mac, she's A) seen the Fae all her life, and B) she was raised knowing what she was, and to hide away from them, though she hasn't had any interactions with the other lines, because they lost contact.

But her ability to see Fae helps Adam, seeing as after the events of The Dark Highlander, he's been cursed, so supposedly, he couldn't been seen, heard, or touched by humanity. Well, they had thought that the sidhe seers had died out. But it's funny, because her family know about him, and he even got a whole book to himself, saying he was the darkest fae.

But there's a reason for that, and that he had real emotions, even though they're different then ours, and his mind is sharper, and he's older, and he does things differently. I just loved them together, they were just really great, and it ended really well-with Darroc human, which is what's going to cause a lot of conflict in the Fever series!

Such a wonderful, amazing book, and yeah, must get to Burned!