Week 8 Review: Spell of the Highlander 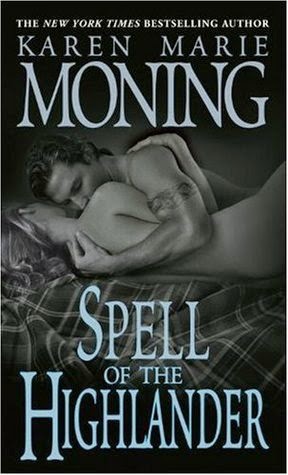 From Goodreads:
It's taken him eleven centuries to find the right woman. He's not about to lose her now.

Jessi St. James has GOT to get a life. Too many hours studying ancient artifacts has given the archaeology student a bad case of sex on the brain. So she figures she must be dreaming when she spies a gorgeous half-naked man staring out at her from inside the glass of an ancient mirror. But when a split-second decision saves her from a terrifying attempt on her life, Jessi suddenly finds herself confronting six and a half feet of smoldering INSATIABLE alpha male.

Heir to the arcane magic of his Druid ancestors, Cian MacKeltar was trapped inside the Dark Glass eleven centuries ago. And when the Dark Glass is stolen, an ancient enemy will stop at nothing to reclaim it. For Jessi, the sex god in the mirror is not only tantalisingly real, he's offering his protection—from exactly what, Jessi doesn't know. And all he wants in exchange is the exquisite pleasure of sharing her bed....

My Review:
Wow, this was such a great book! I enjoyed it so much, it was just so freaking good! Loved reading about Jessi and Cian, and their story! Because a) they were just such great characters to learn about, and b) they have a pretty great story!

I loved the quick looks into the previous MacKeltars' we've gotten to know, like Chloe being pretty pregnant! Because it was just really great! So awesome to have those updates, since we spent a whole book getting to know them!

So it's kinda funny, because I know the Dark Glass, is only one of a lot, since it's the Unseelie Hollow, the Unseelie King made, like, millions, or billions, so just the one, yeah, that's an idea that I found hard to merge with!

Oh, that ending! If Dageus had been wrong, things would've been really bad! Because that was a pretty big gamble with their lives! But with Jessi's immunity to the Druid arts because of the metal plate in her head, well, yeah.

I just really enjoyed this book so much, and I'm almost to getting to Iced and Burned! I can't wait!