Week 9 Review: Into the Dreaming 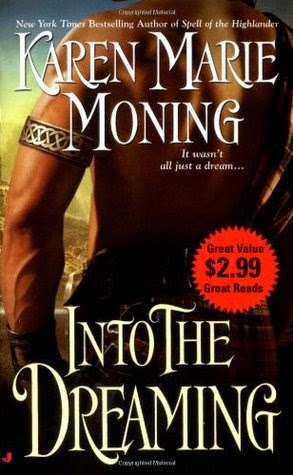 From Goodreads:
Aspiring romance novelist Jane Sillee was completely in love with her fantasy man -- the hot and strapping dark-haired Highlander who'd been coming to her in her dreams for years and inspired her sensual flights of literary fancy.

But it was more than her imagination that conjured up the brilliantly woven tapestry sporting the spitting image of her magnificently arrogant warrior. It was more than a dream that transported her to medieval Scotland to break an evil spell. And it was more than she could handle when she found herself wrapped in the muscular arms of Aedan MacKinnon, who had his own fantasies to fulfill...

My Review:
Oh, this was a really fantastic story! Very short, and I only halfway see how it bridges the gap between the Highlander series and the Fever series, because it has highlanders, and the Seelie Queen, and the Unseelie King.

I just enjoyed the romance between Jane and Aedon. And how Jane had to fight to get him, because he's been trained for 500 years in the Unseelie prison, yeah. That he's forgotten that he was human, that he was taken away.

Because yeah, the Seelie Queen decided that she didn't want the Unseelie King to win, so she made a tapestry of Aedon, and had them go into the the dreaming together, so they could fall in love before the time that they would be getting. And yeah, it ended pretty great!

Oh, and how the Unseelie played the Seelie Queen, that he wanted Aedon to break away and fall in love with Jane. Because he wanted the Seelie Queen to come and gloat, so he could see her. My only question is, how come he didn't recognize her as the great love as his life?

Such a great book, though I wish I could've gotten the extended version the extras, but oh, well!