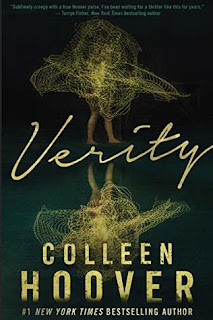 From Goodreads:
Lowen Ashleigh is a struggling writer on the brink of financial ruin when she accepts the job offer of a lifetime. Jeremy Crawford, husband of bestselling author Verity Crawford, has hired Lowen to complete the remaining books in a successful series his injured wife is unable to finish.

Lowen arrives at the Crawford home, ready to sort through years of Verity's notes and outlines, hoping to find enough material to get her started. What Lowen doesn't expect to uncover in the chaotic office is an unfinished autobiography Verity never intended for anyone to read. Page after page of bone-chilling admissions, including Verity's recollection of what really happened the day her daughter died.

Lowen decides to keep the manuscript hidden from Jeremy, knowing its contents would devastate the already grieving father. But as Lowen's feelings for Jeremy begin to intensify, she recognizes all the ways she could benefit if he were to read his wife's words. After all, no matter how devoted Jeremy is to his injured wife, a truth this horrifying would make it impossible for him to continue to love her.

My Review:
This book, wow, it was totally unexpected! I hadn't read any Colleen Hoover books before, and I just starting reading this book because it sounded really good, and just devoured it! Like, I read it in less than 3 hours. It was such a quick, fast paced book! Though the chapters of Verity's manuscript were so dark and twisted!

Pretty much all of the characters in this book are questionable. Lowen both read this personal manuscript, and didn't tell Jeremy about it, until he was pushing her away. Jeremy was praised by both the ladies in his life, and he was pretty good, but he had a dark side, as well, which we learned. And Verity. Oh, Verity.

I'm willing to give Verity the benefit of the doubt, that what she wrote was a writing exercise that morphed into letting her grief out and wasn't true. That maybe she thought some of these things-that Jeremy picked up on-but she certainly didn't do any of it. But her actions during the book, they don't make a lot of sense. Like, she could've called the police. Or gotten away, and then told Jeremy the truth, could've even taken their son with her. But she waited until she had the money. That's the big sticking point for me.

Yeah, this book was dark and twisted and awesome and I loved reading it!