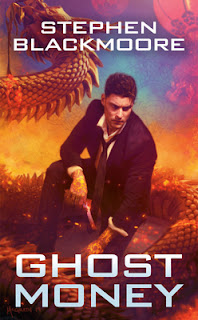 From Goodreads:
The fifth book of this dark urban fantasy series follows necromancer Eric Carter through a world of vengeful gods and goddesses, mysterious murders, and restless ghosts.

The Los Angeles Firestorm killed over a hundred thousand people, set in revenge against necromancer Eric Carter for defying the Aztec god Quetzalcoatl. Carter feels every drop of that blood on his hands. But now there's a new problem.

Too many ghosts in one spot and the barrier separating them from the living cracks. And when they cross it, they feed off all the life they can get hold of. People die. L.A. suddenly has a lot more ghosts.

But it's not just one or two ghosts breaking through: it's dozens. Another mage is pulling them through the cracks and turning them into deadly weapons. Eric follows a trail that takes him through the world of the Chinese Triads, old associates, old crimes. And a past that he thought he was done with.

Carter needs to find out how to get things under control, because if more ghosts break through, there's going to be even more blood on his hands.

My Review:
I really enjoyed this book, it really deals with the aftermath of Fire Season, because all of the deaths that happened there created a ton load of ghosts, which is causing damage to the barrier. Plus there's the whole thing with Darius and his bottle to deal with, as well!

This book also gives us a bit of insight to Eric's past, that he was in Hong Kong, encountered a similar problem, and how he solved it. But here in L.A., it's worse, because these ghosts have been taken through, not getting through the holes in the barrier. Oh, and these ghosts are feral, which ups the danger that they pose.

Eric gets some pretty terrible news in this book, something that's been building since the beginning of the series basically. And it makes sense, given what he's been going through. I have no idea how it's going to turn out, what options there are, and I can't wait to find out!

That ending, yeah, I love all the twists and turns, how he uses his brain, smarter not harder, and that some people just rely on magic. It was a really fantastic ending, and also an killer cliffhanger, as well, so I really can't wait for book 6, which was in the "books by the author" page in the front of the ARC. Yeah!

Loved this book so much, I'm really excited for more, and I'm pretty desperate for more, I need it, because that ending was evil, and I really enjoy being in Eric Carter's world!