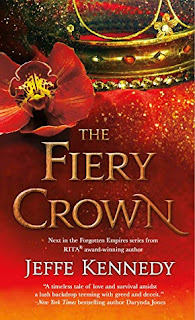 From Goodreads:
A desperate alliance. A struggle for survival. And a marriage of convenience with an epic twist of fate come together in Jeffe Kennedy's The Fiery Crown.

WILL THEIR LOVE STAND THE TEST OF TIME

Queen Euthalia has reigned over her island kingdom of Calanthe with determination, grace, and her magical, undying orchid ring. After she defied an empire to wed Conrí, the former Crown Prince of Oriel—a man of disgraced origins with vengeance in his heart—Lia expected the wizard's prophecy to come true: Claim the hand that wears the ring and the empire falls. But Lia's dangerous bid to save her realm doesn't lead to immediate victory. Instead, destiny hurls her and Conrí towards a future neither could predict…

OR TEAR THEIR WHOLE WORLD APART?

Con has never healed after the death of his family and destruction of his kingdom—he's been carefully plotting his revenge against his greatest enemy, Emperor Anure, waiting for the perfect opportunity to strike. When Lia's spies gather intelligence suggesting that Anure is planning an attack against Calanthe, Con faces an agonizing choice: Can he sacrifice Lia and all she holds dear to destroy the empire? Or does his true loyalty exist in the arms of his beguiling, passionate wife—'til death do they part?

My Review:
Yeah, this book was so amazing, I just devoured it! I loved the first book, and I was really excited to see where things would go in this book. And yeah, we learned a lot, like why blood shouldn't be shed in violence in Calanthe's waters, and more about the enemy that they're facing, and it was so great!

Watching Lia and Con verbally spar in politics and then have steamy times between the sheets was an interesting mix. They worked well together physically, but their political battles, they have different goals and strategies. So watching them clash was so fun to read!

There was this one moment, when Con was in battle, and I was like, conserve your resources, dude. Even if this is the end, there would still have to be clean up done. Don't go overboard! And then everything happened, and I know he learned his lesson!

That ending was just killer. It was emotional and tense, and I didn't know where it was going, and it was just so fantastic to read! And where it leaves us is a mostly better place than when we started, but there's still a lot to be done!

I loved this book so much, and I can't wait for the 3rd and I think final book! So exciting!