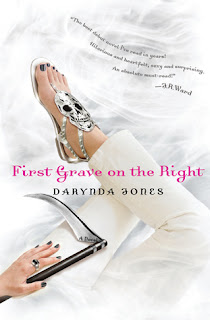 From Goodreads:
Charley sees dead people. That's right, she sees dead people. And it's her job to convince them to "go into the light." But when these very dead people have died under less than ideal circumstances (i.e. murder), sometimes they want Charley to bring the bad guys to justice. Complicating matters are the intensely hot dreams she's been having about an Entity who has been following her all her life...and it turns out he might not be dead after all. In fact, he might be something else entirely.

My Review:
I loved this book so much! Like, I have a really big, epic love for this book! Charley is amazing, her brain makes the weirdest jumps, and she hides behind a pretty big wall, and puts on a witty, sarcastic act, and I just want to know more about her and her world!

First off, the whole grim reaper thing? Awesome, loved how it's built into this world, and the details about it, though I really hope that we're going to, and really think we are going to get those details! I mean, it's the first book in the series, and it's pretty important!

Really enjoyed the case that Charley worked on, she ran into some interesting characters with the lawyer's murders, and dealing with their ghosts, and then the confrontation with the bad guy? Well, it's a good thing that Charley's the grim reaper, a normal person would've died!

Then there's Reyes! He didn't have a big, big role, what with the incorporeal thing and all, but then there's the fact that her mystery night dream lover is the same one that's been following her around all her life, and who has used his scythe on some peoples spines that he deems has done something bad to Charley. Yeah. That was something to learn!

Really enjoyed this book so much, and I can't wait to read more!