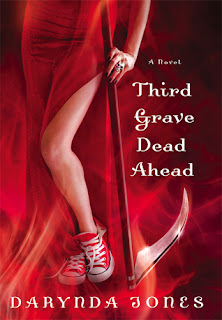 From Goodreads:
Paranormal private eye. Grim reaper extraordinaire. Whatever. Charley Davidson is back! And she's drinking copious amounts of caffeine to stay awake because, every time she closes her eyes, she sees him: Reyes Farrow, the parthuman, part-supermodel son of Satan. Yes, she did imprison him for all eternity, but come on. How is she supposed to solve a missing persons case, deal with an ego-driven doctor, calm her curmudgeonly dad, and take on a motorcycle gang hellbent on murder when the devil's son just won’t give up?

My Review:
This book was absolutely hilarious! A bit more sombre then the first 2 books, what with Reyes coming into her sleep so she hasn't slept really for 13 days at the start of the book, and then everything starts happening, and it's quite funny how she reacts, and sometimes she seems out of it because of sleep deprivation, and other times seems like she's the normal Charley Davidson, not that the normal Charley Davidson isn't crazy, too! But more aware, and not driving into light posts!

All in all, this book had the best mix of romantic, physical, and emotional conflict, the elements of mystery and romance most deftly woven in this book, because the first was more mystery and the startings of the romance, the second book was more the romance, but this one, they were equal, and I really enjoyed that, it made for a very balanced book, where you really didn't know what was going to happen next, and and oh, so funny!

A trade characteristic that I'm starting to see in these books is Charley's humour, and how she hides behind that, which we slowly learn, from the whole "your guide will be from a death you almost caused" thing and how she reacts to the person who might be said guide, well, you see her from behind her shell. Which is 20 feet thick made of the strongest steel and rock and concrete known to man!

Third Grave Ahead is a must read, and if you haven't read the first 2 books, well, get them, because they are extremely great books, and quick reads at that! So read them!!!