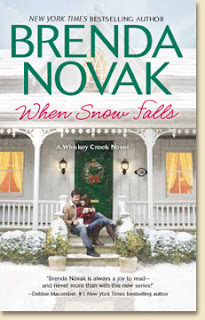 From Goodreads:
After growing up in cheap motels, moving from town to town with her sister and mother, Cheyenne Christensen is grateful to be on her own. She's grateful, too, for the friends she found once her family settled in California. But she's troubled by the mystery of her earliest memories, most of which feature a smiling blonde woman. A woman who isn't her mother.

Although Cheyenne has repeatedly asked for explanations, the people who could help aren't talking. Cheyenne is set on finding answers, but without so much as a birth certificate, it won't be easy.

Things get even more complicated when her closest friend is attracted to the man Cheyenne has secretly loved for years. For Eve's sake, she decides to step aside—which lands her right in the arms of Dylan Amos, oldest and baddest of the hell-raising Amos brothers. He's the kind of guy she's sworn to avoid. She can't afford to make a mistake, not when she finally has a chance to learn who she really is and change her life for the better. But…maybe there's more to Dylan than she thought. Maybe letting him go would be a bigger mistake.

My Review:
This was such a fantastic book! I enjoyed reading every page, reading more about these characters! Brenda Novak is an excellent writer, who knows how to write characters that you want to know more about, and put them in situations that show new and different parts of them! It's so great!

So this was a chance to see more of this town, that there is a side that isn't as well as off as the one that we saw in When Lightning Strikes. And I really liked that, from Cheyenne who's grown up in motels, and Dylan, who's been running the family company since his dad was arrested.

I really enjoyed it, and their story, and also their sibling's story, Presley and Aaron's, a bit, seeing as we got Presley's POV, and what was going on with her! Which wasn't too good, but in the end, it ends on a slightly positive note!

The mystery of Cheyenne's memory was really great. And counted well with the death of her mom, the worry about where Presley was. To find out that the woman that had raised her, had stolen her, was something of a shock, though!

This was such a great book, and that things were going to be happening still (like the Amos dad getting out of prison soon) and yeah, there's more books in the series, and I can't wait for them!