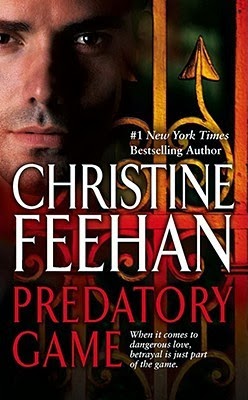 From Goodreads:
Saber Wynter is running from her past when she meets ex-Navy SEAL and Ghostwalker Jess Calhoun. But the riddles of both their pasts are about to collide, shattering the promise of their future with the ultimate betrayal.

My Review:
Such a great book! I really enjoyed rereading this book, I had some of the basics remembered, but not the fine details, the ones that really distinguish one book from the next! The ones that make each book special, and not just the different characters in the same series, but everything that happens to them!

For example, the beginning, when Saber is dumped from her date's car because she won't put out, and then Jesse picks her up, takes her home, and then they go swimming. And that there's a guy that's watching her. Or that Jack, Ken, and some others of Jesse's GhostWalker team come to his place.

That Saber can control electrical impulses in the body, that using that skill, she can kill people, and make it look like an accident, with just a touch. That Eric, the doctor that they've trusted since, like, the beginning, was betraying them all to Whitney, that must've been had for Lily!

And that ending! Not exactly fun for his sister, and it was pretty violent, thought for me, it was over pretty quickly, what with Jesse doing the battle in the dark, by himself, in the basement. Yeah. It'd seem like he didn't have the advantage-but he did-which is evidenced by the fact that he won!

Yeah, really enjoyed this book, such a great instalment to the GhostWalker series, can't wait to reread more!